The Sikh Community is a core believer of giving out love and receiving to create a well-off and a peaceful life. Sikhs are considered to be one of the most powerful warriors among Indian communities but even are lovers of peace as preached by their honourable Gurus. Family, marriage and respecting everyone around are the primary duties of a Sikh man.

The Sikh marriage ceremony is known as ‘Anand Karaj’.  Anand Karaj means ‘Blissful Union’. Moreover, Sikhism is strictly against the practice of dowry and grants equal rights to men and women during the process of marriage. The ceremony takes place at the Gurudwara during daytime. The Guru Granth Sahib is placed at the site and the marriage ceremony is designed around it. Parental consent holds the utmost importance when the talk is about weddings,A  Blissful Union.

Roka and Thaka are important pre ritual customs which celebrates the involvement of parents and their support for the wedding. The father of the bride visits the groom’s place and applies tilak on his forehead along with gifts which conveys the approval for the wedding and the same is done by the groom’s parents for the bride.

It refers to the formal engagement that takes place either at the Gurudwara or groom’s house. Mostly close friends and family from both sides attend this event. The Granthi or priest offers a short prayer before the engagement ceremonies begin. The groom presents the ring and vice versa. The bride’s family presents to the groom a Kara (steel bangle) and a Kirpan (a small knife) which is a reminder of the royal Sikh heritage.

Before the Anand Karaj, the readers from the family or at Gurudwara read the entire Guru Granth Sahib within 48 hours. This is held separately for both the families. The essentials such as white sheets are unrolled on the floor and fresh flowers are placed before the Guru Granth Sahib.

Kirtan is implied with religious texts along with a music called Bani. During the    Ardaas (The prayer recited by Sikhs) the guests pray together for the well being of the bride and groom. Raagis (experienced musicians) associated with the Gurudwara sing Gurbani along with tabla, harmoniums and other instruments.  After the holy prayers, Karah Prasad is disturbed among the attendees. Then the community meal known as Langar takes place.

Few days before the Anand Karaj, the groom’s female relatives visit the bride’s place bringing her an outfit she is supposed to wear on her wedding day. The mother of the groom covers the bride’s head with a sanctified chunni. This signifies that she has accepted the bride to be a part of her family

The bride and the groom’s sister-in-law visit a nearby gurudwara and fill up a special pot called Gharoli with holy water. She brings the water filled pot back to the house which is then used to bathe the bride/groom after their Vatna, which is a paste made of turmeric, barley and mustard by the women of the house and applied on the bride and groom.

Mehendi/Henna is applied to the bride’s hands and feet in beautiful designs. The women of the family gather for this occasion and have designs applied to their hands as well,along with fun music and dancing. Along with this,  the chooda ceremony, the bride’s uncle gifts the bride with a set of red and white bangles that are to be dipped in milk before presenting. Golden ornaments called Kalires are tied to the bangles.

The groom is supposed to travel to the bride’s place on a horse which is decorated with golden ribbons and other trimmings. Relatives and friends of the groom accompany him to the wedding venue. Music and Bhangra dance is an integral part of a Baraat.

The person conducting the marriage recites the four Lavas from the Guru Granth Sahib. After he has completed reading the first stanza, the couple rises from their seats and slowly walks around the Guru Granth Sahib in clockwise direction, with the groom leading the bride. The process is repeated three more times after each Lava. The raagis sing the Lavas in the background while the couple performs the Pheras. After completion of the Lavan Pheras, the raagis sing out the hymns of Anand Sahib. An Ardaas is offered as an indication that the wedding ceremony is now complete.

Elders of the family bless the bride with gifts and wishes of Sada Suhagan, which means may the bride be lucky to never experience widowhood.

The bride prepares to leave her parent’s house and throws rice grains over her shoulders and into her mother’s and brother’s hands, wishing her parent’s eternal prosperity. The bride receives a warm welcome when she reaches the groom’s place. She is showered with flowers and sweets.

A grand reception party is hosted by the groom’s side to honor the newly-wed couple. Family and friends are invited to enjoy a lavish meal along with fun singing and dancing. 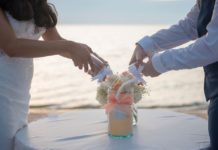 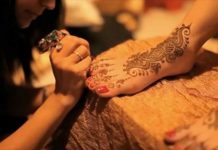 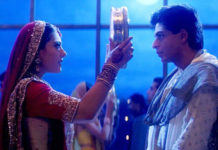 Significance Of Karva Chauth For A Married Woman

Decoding The Elements of Rituals

How To Ace Your Pre-Wedding Shoot