Much like other regional weddings, a Kashmiri Brahmin wedding also begins with the matching of horoscopes or teknis (as they are called). Once, the horoscopes of the prospective bride and groom are matched, the purohit fixes the wedding date according to the Kashmiri calendar. And then, the celebrations galore, wrapped in the warm rituals of Kashmiri Brahmin culture set off.

With much love and adoration in her eyes, the bride’s maternal aunt begins this ritual. As a token of auspiciousness, the aunt lovingly braids the bride’s hair and applies mehendi on her hands – marking the very beginning of the wedding ceremonies. In the olden days, it was after this ritual that the bride would be restricted to stay at home until the wedding day. Wedding invitations are sent only after Satlivun.

An official ceremony of engagement succeeds Satlivun. The bride and groom exchange rings in the presence of their elders. The ritual is known as Kasamdry and usually performed in a temple. The eldest aunts of the bride and groom, prepare var (rice pudding) and distribute it among friends and family to let the word of the official engagement be heard. Gifts, flowers, cash and nabad (a pot containing misri) are sent to the groom’s family as a token of love.

To officially begin the celebrations in order, booking a gourmet caterer holds a critical place in Indian weddings. But to Kashmiri Brahmins, it is extremely crucial to cleanse their houses before the beginning of wedding preparations. An auspicious day is chosen and the respective houses of both the bride and the groom are treated with mud and water. The houses are then decorated in a ritual known as Krool Khaarun. Married women attend the ceremony of Livun, carrying joy in their hearts ahead of the wedding celebrations. To mark the same, the waza (family cook) builds a special mud-and-brick oven called wuri. It is here that the traditional Kashmiri meals are prepared for the proceeding days of celebrations.

Ma’enziraat is the embodiment of the night of pampering the bride. Maternal uncle and aunt hold much significance in Kashmiri Brahmin culture. Hence, the eldest aunts wash the feet of the bride and the groom at their respective houses. Maanz (mehendi) is applied to their hands and feet, and also shared amongst those present at the ceremony. The night of celebration then takes a full spin with delicious traditional Kashmiri meals served for dinner. With dancing shoes on their feet, women get together singing wanwun ( Kashmiri folk songs) with the celebratory atmosphere coming alive. A wooden Kashmiri instrument called tumbaknaer is played during this time.

Haldi ceremony usually follows the mehendi. However, the Devgoan ceremony in the Kashmiri Brahmin culture involves a bathing ritual with a mixture of milk, rice, curd and water called kanishran under a piece of cloth. Holy prayers envelop the surroundings as this ceremony is performed separately in the houses of the bride and the groom. Later, a havan is performed to mark the transitional phase from the Brahmacharya (bachelor) to the Grihastha (householder) for both the bride and the groom. The parents of the bride pamper her with clothes, gifts and jewellery. The bride adorns a special kind of shatkon (hexagonal-shaped) earrings called dejhoor for the first time. These earrings are worn attached with thread strings, which significantly get substituted after the wedding by gold chains gifted by the mother-in-law. Similarly, the groom is presented with a phiran (Kashmiri traditional outfit with long sleeves and triangular neckline) and a pashmina waist-band for his transition. It is during the ceremony of Devgoan that the bride and groom take the forms of Goddess Parvati and Lord Shiva, respectively. The bride’s hair is braided into locks by her maternal aunt in a ceremony called Mas Muchravum. The traditional headgear-scarf called targa is then tied into the locks. Customarily, these locks are opened only once the wedding has been completed.

At the arrival of the groom and his procession, the fathers from both the families exchange jaiphal (nutmeg), symbolising a life-long commitment to the relationship between the families. Uniting the two souls together, an exchange of garlands during the Jaimala ceremony takes place in full grandeur. A dwar-puja is then performed by the purohit before the bride and groom are led to enter for lagan. In the presence of the sacred witness Agni, the pair is made to hold hands while maintaining a firm grip. A cloth is secured over the grip covering the life-long bond in a ritual called Athwas. A mananmal (a golden thread) each is tied to the head of the couple. Amidst the euphony of sacred chants, the Saat Pheras begin to complete the unification of the two for eternity. The newlyweds share their first meal during the Daya Bataah ceremony which is traditionally prepared by the waza. Blessings arrive again in the form of posh (flowers) showers during the Posh Puza ceremony. The newlyweds who are now considered as the divine pair of Parvati and Shiva, are made to sit in a comfortable posture. A cloth in the auspicious colour of red is placed on their heads. Fists full of posh are bestowed upon the couple, who shall now walk the path of righteousness and lead their lives based on the four Purusharthas – Artha, Kama, Dharma and Moksha. The couple stands on the vyoog and are fed nabad post the Posh Puza. Leaving behind the maternal home with a heavy heart, the bride entails on her new journey, throwing heaps of rice and blessing her family with prosperity.

The bride is welcomed with open arms at her new home along with her husband. The mananmal are exchanged. A meal is served to the two by the waza post which the bride is bestowed with motherly love by her mother-in-law. She gifts her new daughter a saree and jewellery along with ataharu consisting of several strands of gold and silver. This ataharu is tied to the bride’s dejhoor signifying her acceptance as a married woman.

Similar to Pagphera, the Kashmiri Brahmin bride leaves for her parent’s home with her husband. They are served with traditional Kashmiri food along with gifts, clothes, jewellery, cash and, salt for auspiciousness. This ceremony is called Satraat. A dusa (six-yard pashmina shawl) is given to the groom. Before returning back, the bride and groom change into new clothes. A contemporary reception is what defines the Ghar Atchun best with the only difference that this is held at the bride’s home. The bride’s brother and sister escort her back to their place for a day. Adorned in jewellery and clothes gifted to her at her marital home, the Lakshmi (bride) is welcomed once again by her family. Later, in a joint gala feast, the entire set of new families bond together over scrumptious meals prepared by the bride’s family, signifying new beginnings and happy lives. 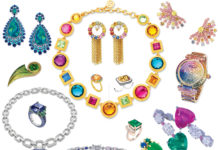 All You Need To Know About A Sikh Wedding