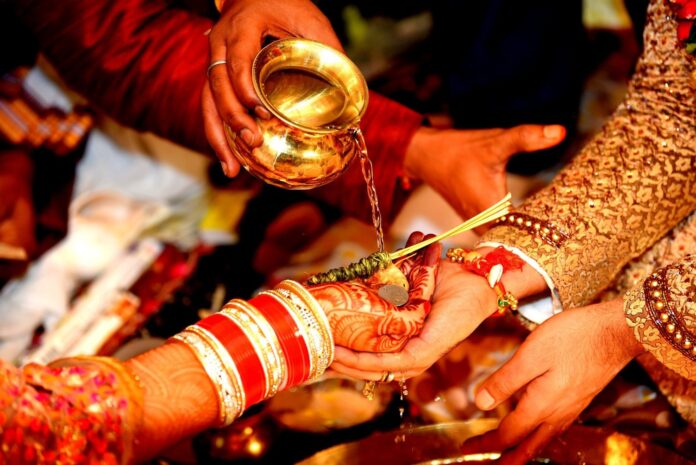 There is no time in the world, where an Indian wedding and its rituals are not talked about, and not cried upon. The traditions, customs, and rituals performed in these ceremonies hold meaning to them while playing a significant role in maintaining the whole-hearted vibe of the entire event. Today we will be looking at some of the most lovable practices followed in almost all the Indian weddings that immediately raise up the bar of the hitch, as well as, creates memories of a lifetime–

Although henna is a symbol of beauty and auspicious ceremonies, it is applied to the hands of the bride to relieve her stress before the wedding. In recent times, it has more likely become a fashion trend, which has also engulfed the groom. So now, in the mehndi ceremony, the henna is applied to the hands of the bride and the groom separately. But there is a twist. The name of the partner or their initial is written in the henna of the person, rather in a hideous manner, and when the partners meet, each of them has to find their name or initials on each other’s hands. How cute!

The emergence of this tradition is unknown, but it is surely fun to do at a wedding. So basically, the bride’s sisters and friends get together and steal the groom’s shoes. They hide it in such a place, which is hard to find. After all, the wedding is at the bride’s place! In exchange for the shoes, the girls ask their brother-in-law to hand them over a grand sum of money. What follows next is a bitter-sweet conversation between the families of the bride and the groom, resulting in the groom paying the price for his shoes, because oh, he wants to see his bride!

Yet another leg-pulling ritual for the groom. Herein, when the groom arrives to marry the bride, the mother of the bride stands at the entrance of the place. She tightly holds the nose of the groom, while pulling it and bringing him in like that! Amidst all the giggles and the laughter, this ritual is just a realization trick for the groom to understand that since he is marrying the mother’s daughter, it is his full responsibility to take care of her, or else…!

Kaleera is a piece of jewelry worn by a bride before the wedding day. The bride’s sisters and friends tie these up to her holy wedding bangles (chooda) as a sign of blessing her for the rest of her life. Later, after the bride is married, a tiny kaleere ceremony is performed wherein the girls who tied them initially, sit in a straight line, and the bride brushes off her kaleera on each of the bridesmaid’s heads. It is said that when a small part of the kaleere is fallen off on a girl, it means that we will be getting married next! An exciting ritual only to exist in an Indian wedding.

One of the most emotional rituals of the wedding is the Gatthbandhan ceremony. When the bride and the groom sit across the holy fire (Agni), the sister of the groom steps in and ties a knot between the bride’s dupatta and the groom’s clothing piece. The knot is a symbol of an eternal bond that cannot be broken by anyone, and which is here to remain.

Kangana is a shy yet adorable wedding tradition that is performed when the bride enters her new home (groom’s home) after the wedding. The couple is asked to sit facing each other, and in between them a large bowl or a deep plate is placed. This bowl has milk, roses, water, and some other flowers. A secret ring is hidden in this bowl, which the couple has to find opposite each other. The game goes around the saying that whoever is able to find the ring first will “rule the marriage over the years!” The winner then puts this ring on the finger of their partner, and just like that, new lifetime memory is created.

Okay, so there were our favorite Indian wedding rituals of all times. If your culture has something unique yet exciting, mention it in the comment section below!

Indian Wedding Rituals and Their Meanings

5 Unique Things To Witness At A Marathi Wedding