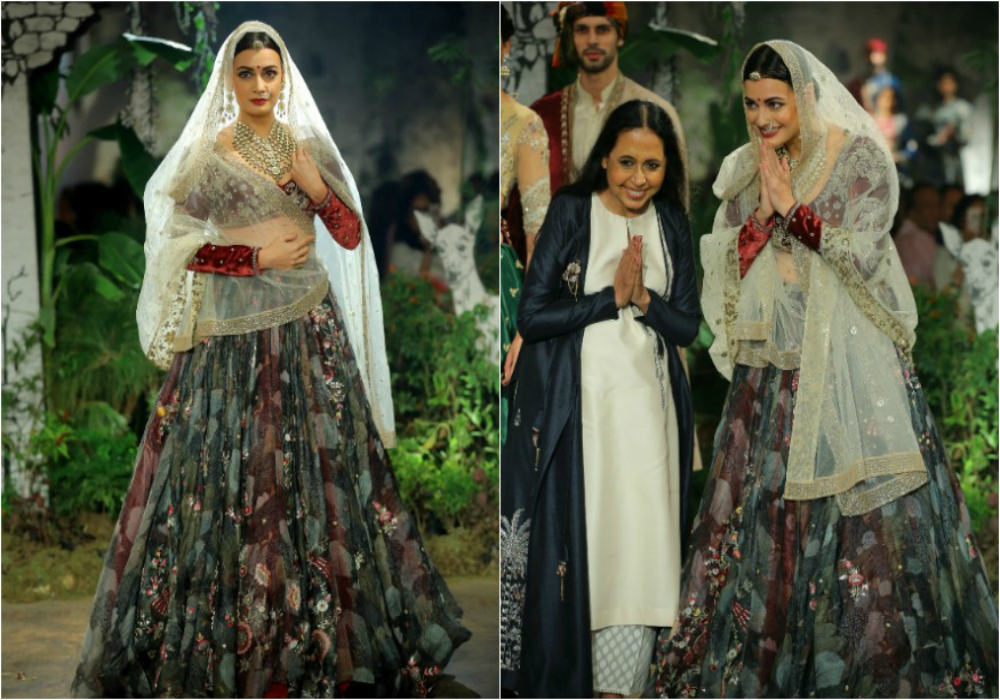 The couturier displayed designs inspired from the miniature art of 16th century Rajasthan, especially Kishangarh, which Princess Vaishnavi Kumari of Kishangarh had personally introduced to the designer.  Her collection was built on bravery, honor, chivalry and virtues that Rajputana culture has ever been known for. With impeccable vintage designs, the couturier mesmerized everyone with the timeless craft in her collection.   Stopping the show, Dia Mirza carried herself like a royal bride in a combination of green and maroon lehenga, leaving everyone breathless. Looking like a period film actress, she looked phenomenal as she slowly revealed herself from behind the ghunghat (veil).

Speaking about the collection, the designer said, “Traveling through the land of the kings, Rajasthan, I found myself on a road less taken to a humble yet resolute mansion, The Sunehri Kothi. Weathered and rugged exteriors did little to give away the grandeur of what was once a ‘Golden Chalet’. In this collection I bring alive its gold emblazoned interiors and intricate architectural detail, allowing a peak   into the Sunehri Kothi that also emerged in the miniature art forms of that region”.

With lovely contrasts in textures and colours, the collection was for both the bride as well as the groom. Bold colours like royal blue, maroon and emerald green were used on velvet, with delicate and intricate work reminding us of the craft of Meenakari. Colours like gold and ruby in combination with colour blocking and art-inspired water colour shades looked pleasing to the eye. She also used cow and deer motifs in her amazing couture collection.

The designer made full attempts to revive the royal collection of Rajasthan. The collection was showcased in collaboration with Vishal Jewels. It exhibited grandeur and magnificence, giving a regal edge to each piece having intricate details inspired from the traditional artworks. The specially designed heritage jewelry was made of uncut and rose cut diamonds, emeralds and precious stones.