Karisma Kapoor’s cousin brother Armaan Jain tied the knot with fiancee Annisa Malhotra. The lovebirds got engaged last year in July in full grandiosity. Their mehendi ceremony took place very recently on Saturday and numerous B-town celebs were spotted at the auspicious occasion. Fun-filled images from the mehendi ceremony are now making rounds on social media. Bollywood celebrities decked up in exquisite attires showed up at the occasion and joined in the celebrations. Armaan’s cousin sister took to Instagram to share some of the pictures from the celebration. Popular Hollywood actress Elizabeth Hurley was also spotted at the grand wedding. She showed up in a shimmery silver dress.

The couple hosted an extravagant wedding reception where Alia Bhatt, Ranbir Kapoor and Neetu Singh made an entry together. Arjun Kapoor and his alleged girlfriend Malaika Arora Khan were also spotted at the reception. Shah Rukh Khan with wife Gauri Khan, Karan Johar, Rani Mukerji, Kiara Advani, Soha Ali Khan with husband Kunal Khemu and many other Bollywood stars marked their presence at the reception.  Karisma Kapoor shared a fun picture from the wedding ceremony as well where the Kapoor’s are seen having a merry time. 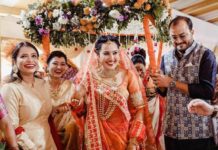 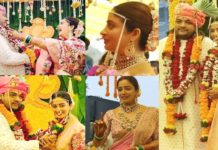 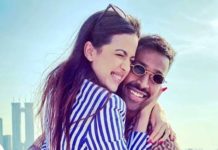 Check Out All Inside Pictures Of Sonam Kapoor’s Mehendi Ceremony