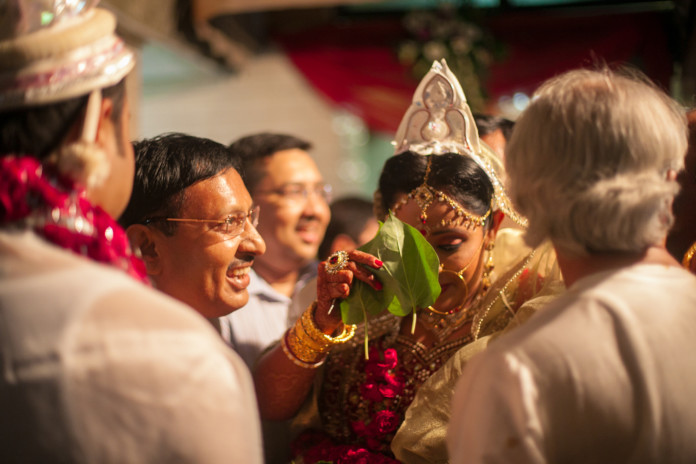 Bengalis, the pioneers of the revolutionary movement of India and the earliest to experience the cosmopolitan culture, boast of a society, which is a perfect blend of modernity and tradition. The canvas of Bengali culture is infinite, and this is reflected in every sphere, be it science, art, literature, research, think tanks, music composers, artists, painters or Nobel laureates. Known for their enthusiastic magnetism and love for art, a Bengali wedding displays their rich culture and the rituals, which are marked by the celebration of life and nature.

The pre-wedding ceremony in Bengalis starts with adan pradan after the bride and the groom decide to get married to each other. The parents or the elders of the families and the purohit (priest) exchange the ancestral lines or banglas to make sure that the prospective bride and the groom are not close relatives of each other, and also that they do not belong to the same clan. Following adan pradan is the pakadekha ceremony (in case of Ghotis), which is held at the would-bebride’s residence. It is a ritual where the elders of the family confirm the alliance and select an auspicious date for the wedding. The ashirbaad also known as the patri patro ceremony takes place after pakadekha in which the parents and elders of both the families bless the couple by sprinkling husked rice and durba ghas on their heads and gifting gold ornaments in the presence of the purohit. The pre-wedding meal, known as the aiburo bhaat, is performed separately at the bride and the groom’s house in the company of the relatives and close friends. The meal comprises of the traditional vegetarian delicacies and the revered food item for every Bengali – the fish. A variety of dishes and sweets are prepared, especially the ones which the prospective bride and groom relish the most. After this particular ritual is performed, neither the bride nor the groom can eat at their parents’ house until the fast is broken by the Brahmin. Just one day before the marriage, the bride and the groom wake up before sunrise for dodhi mongol (ceremonial bath) in which the bride and the groom are fed with doi (curd) and sandesh (traditional sweet). After this ritual, it is expected that the bride and the groom will fast the whole day, until the rituals are over. The next ritual which follows is sankha porano, in which the bride is made to wear sankha, pola, the traditional white and red conch shell, signifying the beginning of her married life. On the day of the marriage in the midst of all the family members, the Vriddhi pujo is performed to invoke the blessings of the ancestors. The pujo is usually performed by the maternal uncle, who fasts along with the bride and the groom till the completion of the vriddhi. The uncle offers fruits and sweets to the ancestors to seek permission and blessings. A borondala, a silver plate containing different items like paan leaves, curd, milk, durba, dhaan, is also offered. The gaye holud totto comes before the wedding ceremony. This is performed individually at both the houses. The totto comprises of the traditional yellow saree with red border, haldi, jewellery and many other gifts. They also carry a large fish decorated as a bride. After the application of haldi to the bride, the relatives from the bride’s side visit the groom’s house and apply haldi paste on him from the same container. This ritual is performed by an odd number of women. Followed by the gaye holud is the boron ritual performed by the mothers of the bride and the groom. In this they are made to stand on a grinding stone and the mother takes the boron and touches it on their shoulder and a number of times on the ground. It is also in this ritual that they tie the sacred thread of chastity on the wrist of the bride and groom. A napit (barber) comes to cut the finger nails of the groom to ward of the evil spirits. The snan (bath) takes place late in the afternoon or evening. After the sacred bath, the bride and the groom get ready for their wedding. A traditional Bengali bride wears a benarasi saree which is usually gifted by the maternal uncle. The groom wears dhoti kurta and a white coloured topor made of pith. This marks the end of the pre-wedding rituals.

On arrival of the bor jatri or the baarati at the entrance of the wedding venue, the mother of the bride welcomes the groom with tilak and sprinkles durba grass and rice on his head. This is done to the joyful sound of ululation and the shonkho (conch shells). The mother, after the tilak ceremony, takes the borondala and touches it on the groom’s forehead and then on the ground as a mark of reverence. After the rituals are completed, the groom is warmly welcomed for the saath paak. In this ritual the bride is made to sit on a piri. The piri on which she is sitting is lifted by the maternal uncles of the bride, and she is brought to the wedding venue with her face covered with betel leaves. The bride is taken around the groom seven times on the piri with her face covered to the sound of the ululation and shonkho. This saath paak or the saath phere refers to the binding of the couple. After the saath paak, the bride, who is still sitting on the piri is brought in front of the groom. The bride slowly and shyly, removes the betel leaves and they exchange glances under a canopy of either flowers or a red cloth. This is known as the shubho drishti which is followed by mala bodol or the exchange of the garlands. The exchange of the mala takes place three times. After the completion of mala bodol, the bride is taken to a separate room where she has to wait until she is asked by the purohit to come in for the sampradan. In the meantime, while she is waiting, the guests congratulate the bride. The bride is then called for the sampradan, where the bride’s father formally weds his daughter to the groom. The couple is bound together by a holy thread by the purohit which is not supposed to be removed at least for the next eight days. Their hands are taken together and covered with a red cloth and placed on the mongol ghot with flowers on the bride’s palm. As the purohit recites the mantra, the couple takes phere around the sacred fire. With the completion of each phere, the bride who is in front of the groom, touches the betel leaves placed on the ground with her feet, to mark the end of each of the pheras. After the completion of the saath pheras, anjali is offered to the fire. The bride’s brother puts puffed rice into her hands and the groom who stands behind her, extends his hand to offer the rice to the fire together. The couple is asked to sit on the piri for the sindoor daan ceremony. In Bengalis, sindoor is not applied on the parting of the bride with the fingertips or the engagement ring, but with dhaan dani. After the application of the sindoor, the inlaws cover the head of the newlywed with a new sari, known as the lajja vastra for the bou bhaat or reception ceremony.

Unlike the North Indian weddings, the bidaai ceremony does not follow immediately after the wedding. Instead, the couple spends the entire night in the bashor ghor in bride’s house accompanied all night by the groom’s brother and bride’s sister and friends. The time spent at the bashor ghor is to break the ice between the couple and an opportunity for the families to get to know each other better. The bidaai of the bride takes place in the morning from her father’s house. Upon arrival, the in-law performs the rituals of bodhu boron. The groom’s sister places a plate containing alta and milk under the bride’s feet, and she then imprints the soles of her feet by walking on a white cloth that leads to the groom’s house. After the griho probesh is done, the couple is not supposed to see each other after sundown, and it is known as the kaal raatri. The very next day after the kaal raatri, is the bou bhaat that marks the first meal served by the new bride in her new home. Close friends and relatives are called on bou bhaat. On the same night, the groom’s father holds the reception. The bride’s family members bring lavish gifts in the form of totto, which are beautifully decorated with flowers. After the bou bhaat, the couple embarks on a beautiful journey of a lifetime based on love, trust, loyalty and understanding.

The warmth in relations, the sweetness in their language and ecstasy in celebrations make their culture stand out.

A Perfect Mélange for Your Dream Wedding: Hyatt Regency Dharamshala

Exceptional Couples Activities In The Maldives

Perfect locations to have a Destination Wedding, based on your Zodiac Sign

A Wedding That Spells Aristocracy