A wise woman once said someone’s body language can be extremely helpful in telling almost all circumstances even when dating. This probably has to do with the fact that body language is like the gate-keeper to someone’s inner thoughts, even if no one is deliberately saying anything. It is the kind of thing where people show how they are actually feeling—through hand gestures, smiles, tilts of the head, etc.—instead of explicitly saying it. But dating someone who shows they care rather than tells them they do is really beneficial. So if you, too, want in on this little inside world of body language speak, there are a bunch of different cues and movements you should look out for. Below, find what is the expert advice to pay close attention to if you want to see if the person you think you are vibing with is actually, legitimately into you too.

He tilts his head in two directions

When a guy tilts his head to the side, it shows that he is curious and tuned in. You are obviously occupying that left brain of his, so play into that you smart one!

When his breathing is at a slow pace, this indicates that he feels relaxed and can fully be himself around you. This is a good sign, as men like to feel comfortable around their partners.

He inadvertently grazes or touches you

Whether he accidentally touches your hand or can’t stop hitting your foot underneath the table, it is a great sign of contact because it shows he wants to be close to you physically.

He stumbles over his words

If he stumbles over his words a lot when he is most often the life of the party, he is nervous around you. When you know he is not normally awkward but he is being awkward and can’t seem to formulate sentences around you, this could be a sign of interest.

He stands inches from you when you are face to face

In line at a restaurant, on a subway car, saying goodbye, whatever the situation may be, he just can’t resist the urge to be as close to your face as possible. If he is not afraid of body closeness and makes his desires clear but not creepy, it is likely he wants to take advantage of being as close to you as possible.

He touches his throat

The throat represents communication and vulnerability. If he reaches up to touch it during your interaction, he is interested in you and worried about coming across well. But again, context can play a key role: If you are talking to a player, a throat touch could signal dishonesty. So feel him out and look for other signs on this list before you go reassure him.

When he holds your hands, he presses his palm against yours 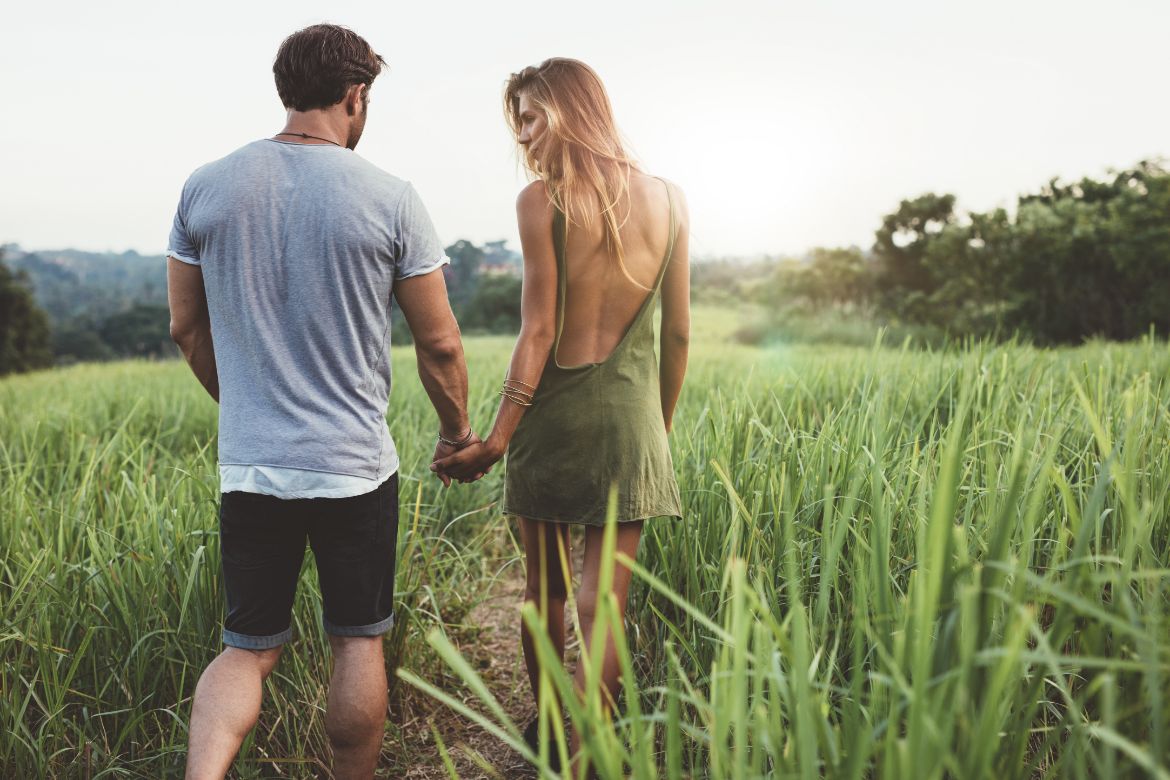 This kind of full-on hand-holding signifies a desire to connect. The same goes for interlocking fingers. On the other hand, an arched palm means he is scared or maybe holding something back.

Even if you have a comfy armchair next to your tiny couch, he is opting to squeeze next to you instead. If you are at a restaurant that has booths, he won’t shy away from sitting on the same side instead of across from you. This is symbolic of him being on the same ‘team’ as you.

Signs that your partner is here to stay