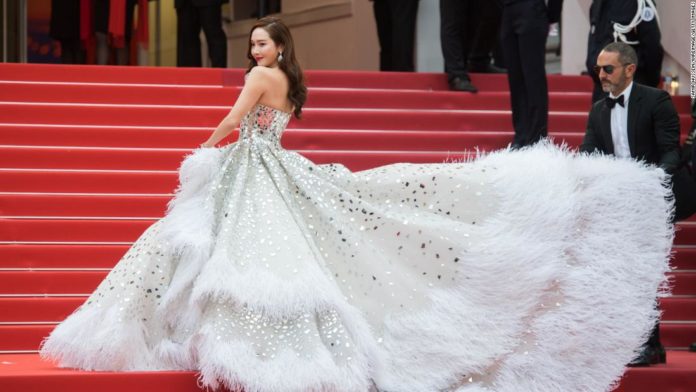 Cannes Film Festival is one of the biggest festivals, that celebrates cinema of the world. Being an ‘invitation-only’ event, it is also exclusive to the significant people around the globe, which further directs the attention towards the stars’ sartorial choices. Throughout the years, the men and women show up in their most stunning gowns and suits to pose at the red carpet.

Among the women, time and again, many have stunned the people with their bridal gowns that they flaunt and style on the red carpet. Following is the list of divas, who have taken a bridal-inspired gown and added the red carpet glamour to it at Cannes –

No one beats Rihanna when it comes to any red carpet around the world. She reigns as the undisputed queen of the red carpets. During the 2017 premiere of Okja at Cannes, she stepped on the red carpet in Dior Haute Couture’s off-white silk taffeta coat and bustier dress. She paired it up with micro sunglasses and matching heels. She gave it elegant finishing touches with Chopard jewels. Her look was revolutionary in terms of setting an example for a wedding gown.

The Indian diva who rules the Cannes red carpets is Sonam Kapoor. On several occasions, she has actually rocked a bridal look at the Cannes Red Carpet. Here we have included two of her Ralph and Russo looks that stand out as perfect designs for a modern bride. One of them that she donned in 2017 with shoulder-cut on one side and cape on the other was saree inspired. The other one from 2016, consisted of a short train made of flower embedded tulle.

Our favourite ‘Gossip Girl’ likes to take ownership of her looks as she steps on any red carpet. She hasn’t hired a stylist for the fear of losing control of her looks, and her personal style collaborations with her designers are just plain awesome. During the 2014 Cannes Film Festival, she styled a beautiful Chanel 2014 Haute Couture white-shimmery gown for the red carpet. It can be the best look for today’s bride as it also featured pockets!

The Bollywood Queen was spotted, this year, in a beautiful fish-cut ivory wedding gown with a glittery train by Michael Cinco. The off-shoulder gown with Kangana’s fierce attitude and delicate sparkly details on her gown gave it a standout look at the Cannes.

During the Cannes 2018, our very own leading lady of Bollywood attended the 2018 Cannes Film Festival in an elegant white see-through Zuhair Murad gown. The long train that extended from the cape was embroidered with intricate threadwork on flower patches. She looked like a dreamy bride in the piece.

The gorgeous Brazilian model and a Victoria’s Secret Angel, Adriana Lima, made her Cannes red carpet appearance in a strapless white, beaded Naeem Khan gown from the designer’s spring 2018 bridal collection. Her pulled-back hair, coral lipstick and a heavy diamond neck piece turned the red carpet into an aisle as she looked like a stunning modern bride.

Also Read: The Hairstyles of Westeros

Summer is for prints and patterns

Swimwear fashion in the history of Bollywood