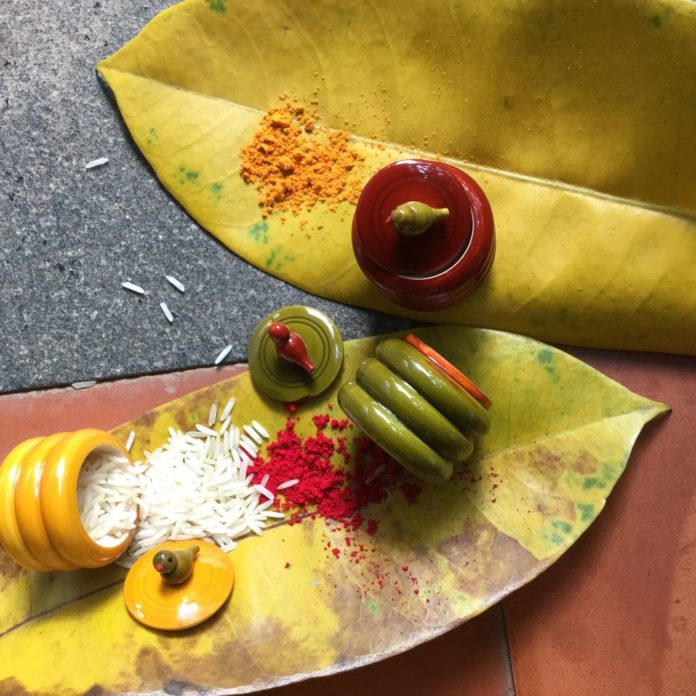 Several notes dance to the lines of a pianist to form a symphony. Age-old customs and rituals too form a symphony of celebrations in our lives. Do you know that it takes several powerful components to bring fundamental meaning and effectiveness to any ritual? The importance of these constituents lies beyond scriptures and — your and our understanding combined.

‘Akṣatā’ literally translates to unbroken, untouched or unhusked. It is believed to be the purest form of grain closely associated with the Hindu deities. The life-sustaining quality of rice makes it the most apparent symbol of abundance, auspiciousness and fertility. In Hinduism, unbroken elements are believed to invoke the purest forms of energy and spiritual vibrations. Conversely, the presence of any khandit (broken) element is often considered to divert positive vibrations away from our lives. When Gods are invoked, their energies are believed to get transferred into the rice present at the samsakaras. A small amount of rice is usually placed in the palm of the right hand during rituals that involve dhyana (concentration), vachika (recitation of mantras) and kayika (worship). The application of rice over vermillion on the forehead during Tilak is asimple way to shower blessings. Rice also significantly symbolises the transitional phase of an individual’s life and personality.

Rituals involving women, who are considered to be an embodiment of Lakshmi – the Goddess of wealth, cannot be completed without rice. Be it her transition into a wife during Saptapadi, her departure into the new life during Vidai or her arrival into her new home during Griha Pravesh – she is known to spread to prosperity and  carry wealth wherever she goes, hence is showered with or upon with the sacred grain. Another form of rice, Laja (puffed rice), is correlated with the fulfilment of desires.

Enwrapping a gamut of wholesome goodness inside, plenty of facts hide behind the hard shell of God’s own fruit – Sriphala (Sri- Goddess Lakshmi, Phal- Fruit). This sacred food represents an epitome of our real beings – the outer shell of our Ahankaar (ego), which must be underlined with politeness and purity of our nature to equate benevolence. Stripping off the jute-hair from the shell indicates the abdication of one’s selfish desires. Unlike other fruits, coconut is known to perish the last, making it the best choice of fruit to be offered as prasada. The ritual of breaking a coconut during or after a ceremony demonstrates the Hindu belief of complete submission to God. The tender self splits itself, open to the almighty, for His choice of blessing. The devotees with His divine touch, guide themselves to the path of righteousness.

The undesirable practice of Bali (sacrifice) was denounced at the recommendation of Maharishi Adi Shankaracharya, paving way for the tradition of performing coconut sacrifices. Animal and human sacrifices were thus abandoned, befitting to the path of Ahimsa (non-violence). Today, coconut is broken essentially to retain auspiciousness and blessings of God for new beginnings. Sprinkles of this satvik fruit are regarded holy for the water inside the fruit is revered virgin. Once placed atop a kalash, nariyal symbolises a woman’s womb.

Such is the size of a banana plant that it is often called a tree. Known to relate with Devguru Brihaspati (planet

Jupiter), the tree has been historically significant to Hindu weddings. Weddings were never complete without its massive trunk decorating the entrance to welcome the guests. For its sacredness and proximity to Lord Vishnu and his wife Goddess Lakshmi, the tree’s presence at weddings could be felt through its inexpensive and energetic fruit, and leaves. According to ancient scriptures, worshipping Vishnu and Lakshmi bestows a couple with a life-long, happy married life.

The symbolic tree is, therefore, a staple at Hindu weddings. However, continuing modernisation of traditional weddings, banana leaves are losing their lustre to expensive international flowers. Yet some religions are keeping the tradition revenant with the use of banana leaves and the fruit itself, at weddings. A poor man’s essential, banana is the most favourite of Lord Ganesha – the remover of obstacles, whose service before and during the wedding is a must. Also known as Kadli, the fruit is also dear to Lord Satyanarayana, a form of Lord Vishnu.

Gifting money as shagun has been a tradition, long practised in Hinduism. Shagun is ideally offerings made to God during rituals or a token of blessings, given by the elders. These blessings can usually come in materialistic forms of clothing, money or ginnis (gold coin). Have you ever wondered why odd denominations of 11, 21, 31, and 51 are preferred? These values are multiples of ten succeeded by one, a rupee coin accompanying them ergo. In order to signify a progressive blessing, the shagun is given by an added one. This way, the blessing doesn’t get limited to absolute numbers and is seen as ever-growing. A simple way of saying “until we meet again”, this added rupee makes up for a cycle of gifting and repaying. An uneven amount also makes for uncalculated luck and blessings. 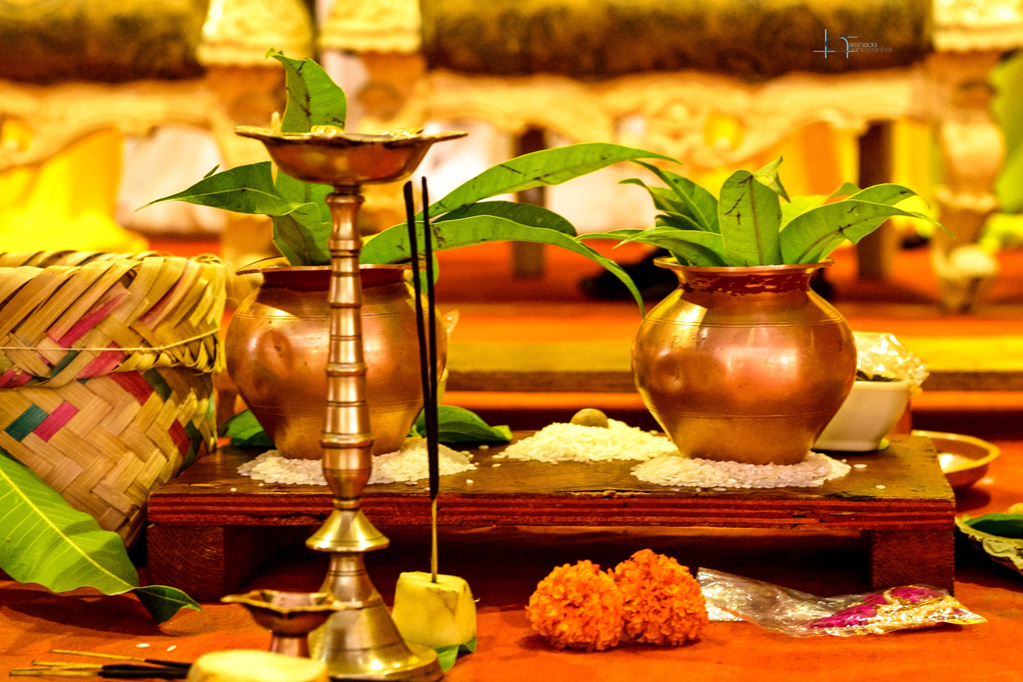 Time-worthy dhatu (metal) such as gold and silver in the form of sikka and ginni, also serve as preferred forms of shagun other than banknotes. Since dhatu is derived from mother earth, a form of Goddess Lakshmi – coins are recognised as the most auspicious form of metal used in a wedding.

Haldi (turmeric) and kumkum (vermillion) are absolutely synonymous with customs and rituals in Hinduism. A slight mention of the two and you will know that some form of puja is being discussed. A puja is nothing but a mere customary practice of celebrating joy – the joy of new arrivals, new beginnings, the list is endless.

Haldi and kumkum form an inevitable part of performing rituals, though may not be used at the same time and for similar purposes. For instance, a superfood by nature and the colour of the sun – haldi is sometimes used to colour akṣatā before being offered to God. In many religions, brides are adorned with special mangalsutra made with haldi-dipped strings and gold pendants to instil purity, health and pride. The naturally extracted antibiotic is also famous for lending an aurelian glow to the bride before her wedding through haldi ceremony.

Kumkum or vermillion also has multiple meanings. Its form as sindoor decodes a woman’s fertility and prosperity in her married life. When applied as tilak, kumkum changes its meaning to that of blessings and a warm welcome. When applied to the centre of  the forehead it astrologically rules Mesha (planet Mars). Spaces will always be less when words are more. The beauty of diverse Indian weddings lies in the deep cultural connotations that each ceremony beholds. The ingredients for such celebrations are not only constituted by mere kumkum and Akṣatā but by the uproar of plaudits percolating through the crowd.

Kannada wedding and its essence

Rituals from a Rajasthani wedding

The colours of a Kashmiri Pandit wedding

Rituals from a Rajasthani wedding

Kannada wedding and its essence