The most awaited and glamorous evening witness enchantresses and divas walking on the red carpet. The 74th Golden Globe Awards honored the best film and American television of 2016 and broadcasted live on January 8th 2017 from the Beverly Hilton from Beverly hill. Hollywood’s mega stars were seen dazzling the show from Sarah Jessica Parker from Ben Affleck to Ryan Gosling and Leonardo DiCaprio. Eight times Golden Globe Winner Meryl Streep was the night’s guest of honor, receiving the prestigious Cecil B Demille Award. La La Land swept all the seven nominations and broke the Golden Globe record for most of the awards given to one single film in a year.

Chopra wore a fitted Ralph Lauren textured golden gown. Of course, she looked sexy as hell in the sequins dress that was paired with a diamond drop necklace lying suggestively on her neck. Her hair looked simple and subtle with a deep mauve colored lipstick which enhanced her luscious and fuller lips. But Priyanka made it to several worst dressed lists as well, with the dress described as ‘dipped in gold’ where as our leggy lass, Deepika managed to turn heads and grab attention in her cherry yellow one shoulder RALPH LAUREN gown. Her face looked ravishing in a side parted hair and their tremendous waves in it. The eye make-up was on-point and her pearl drop earrings lent the right amount of style. 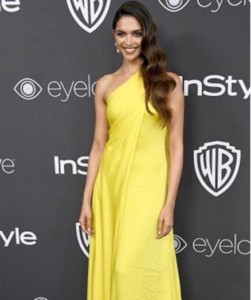 On the whole, our Indian girls are making our country proud and are putting India on an international map. And keeping the slight hint (rumors) in our mind after watching upcoming Koffee with Karan episode, Sonam Kapoor will be making her Hollywood debut soon.  WE ARE PROUD OF YOU.”