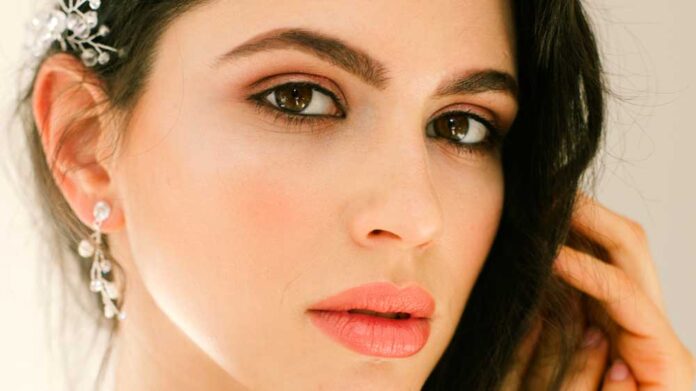 Bollywood has always been an inspiration or a guide for most of the Indian population. So is the case with weddings. Everyday we say thousands of people are getting married, and so many of them have themes that resemble the industry. Our ladies look up to the queens of tinsel town, and their trousseau and makeup, to make the most of their D-days, and to shine brighter than ever. And why not, our forever slayers really know how to glam up their look in the most subtle, yet chic manner. Today we will shift our focus from the movies, and dig in some real life wedlock scenarios where the B-town performers have persuaded us to take up these serene makeup looks –

Alia is the talk of the season, and she should surely. With the slightest dab of foundation and barely-there kohl, Alia is changing norms in regards to bold and heavy makeup looks for the wedding day. We love how her makeup is so in-sync with her Sabyasachi couture. Opting an all pastel look was a risk, totally worth it. Lightly touched brows, a classic Red bindi, single stroke kohl eyes, and a nude lip shade, is what comprised her wedlock look.

Travelling a few years, we have Aishwarya’s Jodhaa wedding look, and we are surprised that this trend goes back to so many years. Her look was emphasized more towards jewelry and attire, and less towards her face, to focus on her naturally beautiful skin. It appears as if there is absolutely no powder face and there is one bindi sitting on her forehead. Brides with heavier ornaments can opt for this look.

Another Bollywood beauty who chose to go low on glam on one of the most significant days of her life is Katrina Kaif. She married actor Vicky Kaushal in a Sabyasachi saree, and took the vows with a doll-like face. Her look was identical to that of Alia’s, but a little elevated. She is wearing muted tones of foundation and blush, whereas her eyes are the lowest versions of smoky. A red bindi and nude lip completes the entire get up.

A fairy for real, is what Anushka Sharma’s look depicted on her matrimonial day. One of the earliest stars to get married, Anushka started this trend in the industry and set the benchmarks too high. Inclining towards a blushy nude makeup look, Sharma seemed glowing as ever. Her tones were coordinated with her pink lehenga and similar jewelry. With lightly done eyes and a pinch of blush, the whole of her face reflected a pink tint.

Much similar to Anushka’s look, Neha Dhupia combined the undertones of pink and brown effortlessly. While her trousseau sings blush, her eyes and cheeks say brown. Dhupia wisely chose a warm base for her face, and accentuated the same with a pink bindi and mauve lip shade. Her cheeks have been bronzed well for that extra flush of color, which is complemented with deep hued eyes.

Priyanka Chopra married singer Nick Jonas in multiple setups and attires. But the main wedding where she wore a luxuriously long white wedding gown, is what we are talking about. Supporting her Bollywood friends, Chopra, too, chose to go soft on her makeup by opting for the most basic coverage. The only color in her outfit was of her light magenta lips which totally worked perfect as a sign of color pop. Wavy tendrils and soft toned nails completed the ensemble beautifully.

While her wedding gown spoke a thousand tones of red and peach, her makeup chose to remain mum. Shibani Dandekar’s wedding look was one of a kind. She opted for a nude look for her D-day, which was the right thing to do with that color popping regalia. With subtle cheeks and nude lips, Dandekar put some amount of shimmer only on her eyes, and she slayed every bit of it.

So, ladies that was all about choosing a different route to up your wedding game. You could take inspiration from the above Bollywood looks whole-heartedly, or you could do something of your own! We are waiting for your angelic pictures as always.

Inspire your next OOTD with these desi kurtha styles

Ways to remove makeup without wipes

Nose Contouring Tricks For Every Type Of Nose