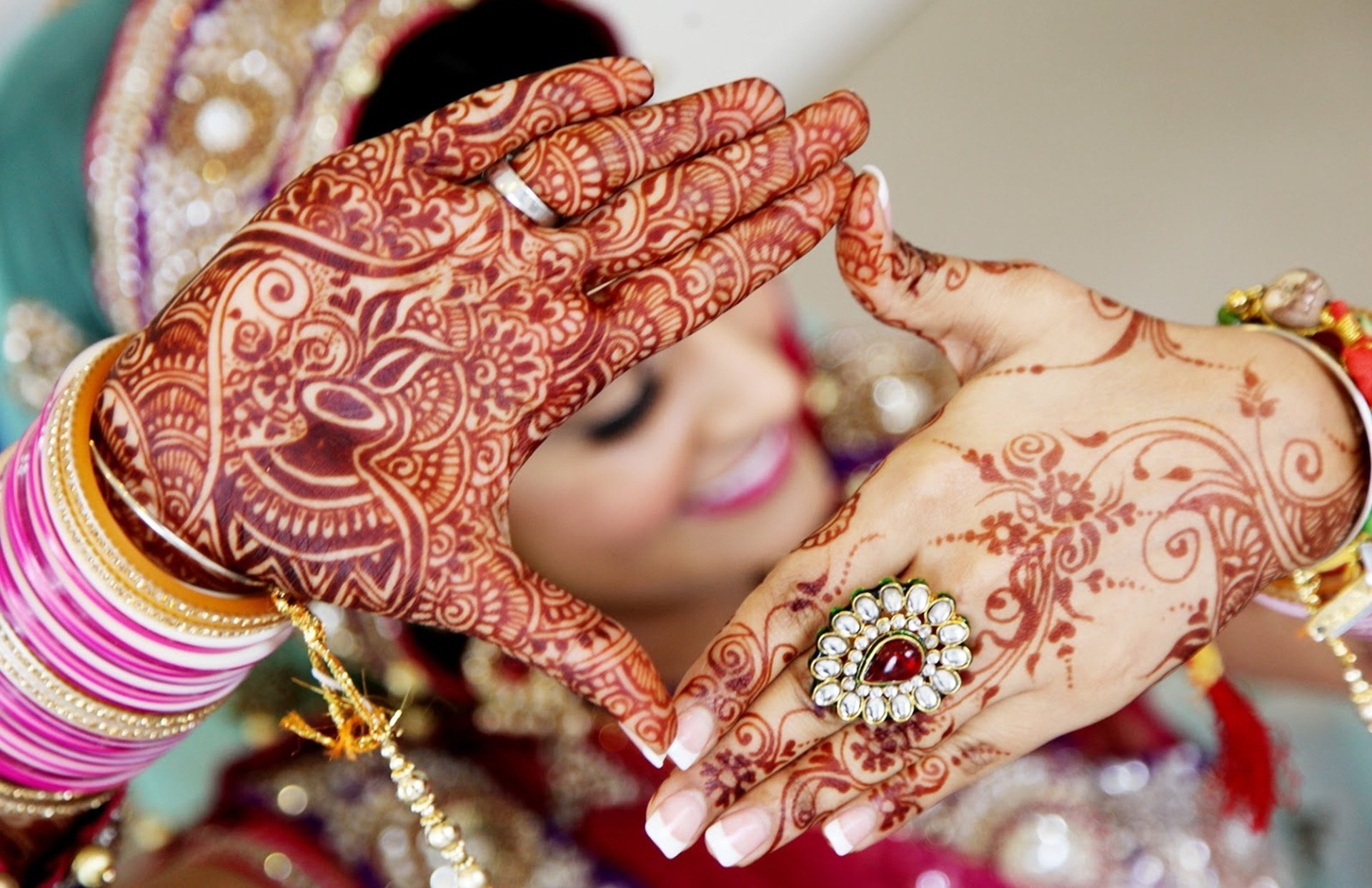 Utter the word mehendi, and any Indian girl is ready to give in to its allure. Such is its magnetism that Indian weddings and festivals are deemed incomplete without crimson tinted hands and feet of the married and the unmarried woman alike. A very common Indian phrase used to hint at the marriageable age of an Indian woman is haath peelen kaarna, or painting the hands yellow, comes from the significant use of turmeric and mehendi leaves, to tint and decorate the palms of a bride for her marriage. The Vedas have a clear mention of the use of both, where the mehendi word is said to have derived from the Sanskrit word mendhika. The Vedas tell us that mehendi and turmeric paste was used to paint such a design which was intended to be a symbolic representation of the universe, where the sun was the centre of the universe and the rest of the planets revolved round it. This painting on the hand was also done with the idea of representing the awakening of the inner light of a human being. This was the simplest design that was found back then, and it happens to be the simplest design till date in the Hindu wedding ceremonies.

Change seeped in the Indian traditions, and soon there were many variations in mehendi designs. Mehendi is the local variant of heena designs in India and women used it not just for weddings, but other religious events and traditional ceremonies. Festivals like Teej, Karva Chauth, Rakhi, Vat Poornima, Bhai Dooj and Diwali are some of the important Hindu occasions to adorn the hands and feet with the colours of mehendi or heena.

Digging the history behind the use of mehendi, early evidences say that heena was applied on the bodies of the Egyptian mummies. The hair and nails of the mummies were stained with the reddish-brown tone of heena. The heena plant known as Lawsonia Inermis originated in Egypt, and later was brought to India, as early as 700 AD. The Persians and the Mughals who invaded India long back were instrumental in making the artistic designs of heena popular among the Indian women.

The mehendi designs are usually drawn on the palms, back of the hand and on the feet of the women folk, where the darker shade of the mehendi gives a beautiful contrast to the lighter shades of the palms. Mehendi is even used to paint the palms and feet of the Indian men, for religious purposes. The groom has it painted on his hands for his marriage, and a brother gets it painted on his hands on the occasion of Raksha Bandhan. The tint of the mehendi is considered auspicious and hence, called a shagun. Traditionally, women used the grinding stone to grind fresh heena leaves with a little mustard oil. This paste of pure heena leaves not only gives a rich and dark colour, but the soothing and cooling effect and the intoxicating aroma of the heena leaves acts as a stress reliever. Mehendi or heena cools the body, and helps the bride and the groom to do away with the nervousness and find calm. The medicinal properties in mehendi is said to improve the blood circulation in the body, thus, ensuring the general wellness of the bride and the groom. Mehendi has more to it than being a beauty enhancing factor. It is applied on the hands and feet of the bride and the groom not simply to beautify. The colour, aroma and medicinal properties of mehendi act as a strong aphrodisiac. Hence, it stimulates love and romance in the newlywed couple.

Just like mehendi, the evident use of alta, which is a red dye, used by women to adorn their hands and feet, can be found in the Hindu Upanishads. The red alta, since long has been used as one of the elements of the 16 bridal adornments or the Solah Shringar. The red of the alta was symbolic of life, fertility and prosperity. Alta was traditionally made from the juice of beetle leaves. At times, kumkum (powder) was also used to get the liquid form to paint the hands and feet red. In the modern times, lac is the ingredient used to get the finished product of alta. 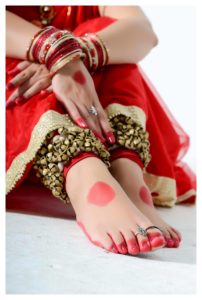 Mahawar or Rose Bengal is the other name of alta. This vivacious colour of alta is an integral part of the festivities of Bengal and Odissa. Durga puja, the biggest festival of the Bengalis will be incomplete without the use of alta by the married women. It is not just the women, but even the idols of Goddess Durga are also tinted beautifully with the rich colour of the alta. In Bengali weddings, the alta becomes the centre of an important ritual after the wedding. As a newlywed Bengali bride enters her new home for the first time, she is made to step on alta and enter the house leaving behind a trail of her red footsteps. The new bride is symbolic of Goddess Lakshmi, and therefore, is looked upon as the harbinger of prosperity.

Alta is not just an essential adornment for the weddings of the different cultures of Hindustan. Indian culture is rich in different forms of art and dance, and alta since the very beginning has been an integral part of the dance performances. Be it Bharatnatyam or Kathak, alta is an absolute necessity to complete the look of the dancer.

Modernity has seeped in, but alta still enhances the beauty of the Indian classical dancers, and women who trust only the traditional for the effervescent Indian beauty.

Get The Glow With DIY Face Packs

This season, stay put for the next MAC ensemble to bowl...

How to combine active ingredients & what to avoid