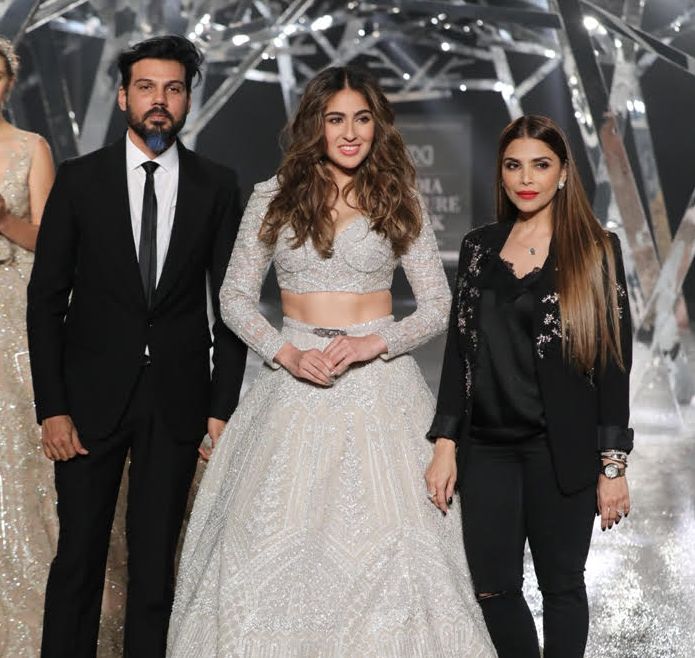 “This was the first time I walked on the ramp and I would be a massive liar if I say I wasn’t nervous. I was actually extremely nervous. But I had a lot of fun also,” told the actress to the media.

The designer duo Falguni and Shane displayed their latest collection inspired by the baroque architecture of Rajasthan’s Fort Amer.

“The ensembles showcase elevated grandeur, elegance and opulence with a hint of edginess that identifies with our signature style. The silhouettes are modern yet traditional, with an element of surprise in each of them—whether it’s in terms of construction or surface ornamentation. We’ve attempted to weave a web of modern eccentricity and yesteryear elegance, evoking a rich repertoire between the two,” said the designer Falguni Peacock.

The ensembles were an explosion of dimension and grandeur; it played with the idea of elaboration while retaining its unconventional aesthetics. The colour story seamlessly synced the collection together with shades like Spanish vanilla, lavender fog, smoke green, pewter, ballet pink, prism silver, scallop shell, Tuscan gold and midnight blue. With ‘Bonjour Amer’ Falguni Shane Peacock rendered an escape from the ordinary and celebrated the extravagance of Jaipur’s eclectic landscape as well as its vivid colours.

Of Modern Traditions — A Friday At Lakmé Fashion Week 2019