JioWonderland opens as an annual festival for the ultimate family holiday experience for the first time in India, starting from December 26-30. The gala event will be open to the public from 12 noon to 10 p.m. 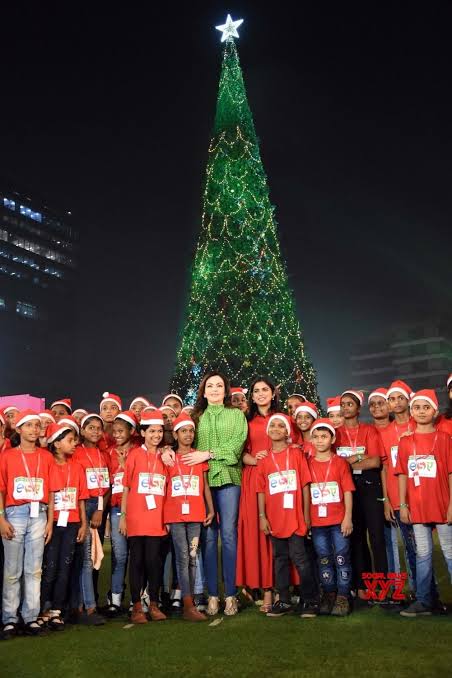 Inspired by international carnivals, the Jio Wonderland is a Made in India Christmas fete that has something for everyone, be it drone shows, magic acts, a Ferris wheel, and trampoline parks. There is also a meet-and-greet session with Santa Claus and photo booths to capture the Christmas spirit.

On Christmas, the mother-daughter duo inaugurated the five-day long carnival with a special highlight that was for 4000 underprivileged children, as part of an initiative by Reliance Foundation.

The carnival started off with Nita and Isha Ambani switching on the lights of the Christmas tree, termed ‘Recycle4life Christmas tree’, which has been put in place using RelWood and GreenGold fabric that is made from recycled plastic bottles. Moreover, the RelWood used is 100% recyclable, has a wood-like finish without containing any wood particles, confirming that no tree was cut for its production.

With the grand opening by aerial drummers, the magical evening saw a Santa on his sleigh, continued with the festive spirit, later a meet and greet with the kids.

Among celebrities who graced the occasion was cricketer Rohit Sharma with his wife and daughter, Shah Rukh Khan with son AbRam, Rannvijay Singha, Karan Johar with kids Yash and Roohi, Tushaar Kapoor with his son and many more. A special parade including the Hamley and Hattie bear from Hamleys family brought extra cheer for the children as they met their favorite characters in person.

Children carried back the memories of a mesmerizing experience and special gifts handed over to them by Ambani and Santa Claus. Reliance Foundation has been organizing Christmas celebrations for underprivileged children since 2012. It also supports Hamley’s toy donation drive and this year has distributed over 5000 toys to underprivileged children across India.