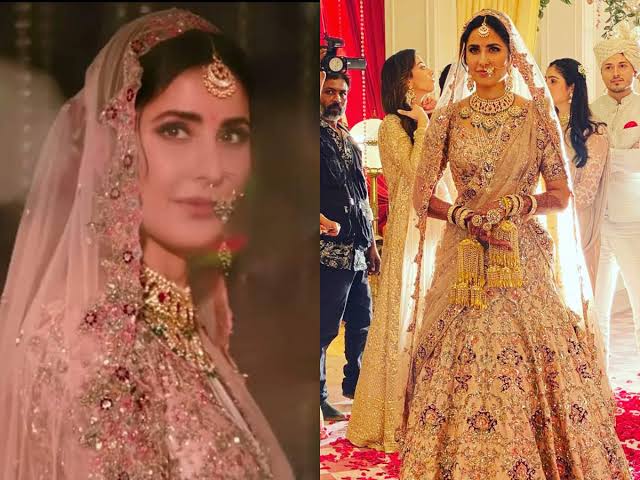 It’s finally happening , that’s right we are talking about Vicky kaushal and Katrina Kaif’s long awaited wedding . The to be wed couple were last leaving to Jaipur for their wedding and the internet is abuzz with much anticipation. As everyone is awaiting the first look of the groom and bride in their  wedding attire we have compiled Katrina’s most iconic bridal looks, scroll down to have a look.

The Punjabi bride in Singh is king 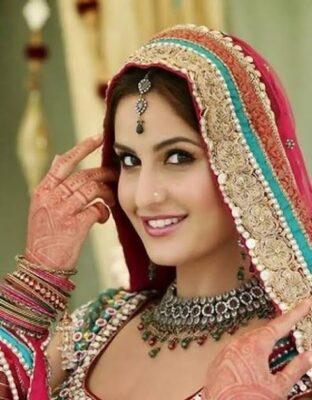 Her red A-line lehenga with golden motifs running down its length and a green brocade blouse, was simply alluring. The pearl work on her dupatta with a complementary turquoise border was an excellent choice. And her oxidised jewellery, especially the bangles, made her look like a queen. This is so far Katrina’s best look as a bride.

The Gujarat bride in Slice Aamras 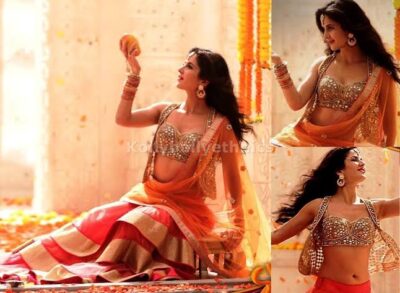 As a  Gujarati bride in search of a perfect groom, Katrina looked totally stunning in this look . her look had mirror work choli paired with a plain coral lehenga along with a golden border, and a kesari dupatta and for the jewellery part, she opted to drop the neckpiece and instead, kept a maang tikka, chand baalis and hathphool, all in kundan, polki and gold. She also added bangles to it. If you are just as valiant as this bride, go for this look. 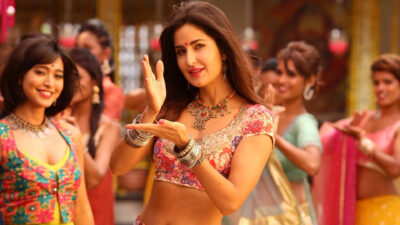 With a breezy lehenga and a spring in her step,  Katrina Kaif in base bar dekho  flitted out of age-old Bollywood stereotypes with the perfect modern mehandi bridal look . The bride-to-be made the most of her time in the spotlight in her fuss-free silhouette. Worn without a dupatta, Katrina Kaif’s lehenga was paired with a matching blouse. To complement her colourful floral lehenga, the actor gave the floral jewellery trend a rain-check, and instead opted for gypsy bangles and a silver, mirror and thread-detailed necklace

The Christian bride from Namaste London 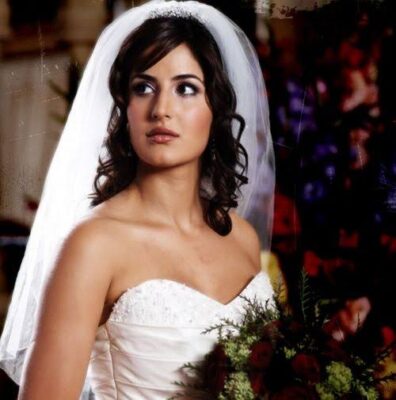 Back in 2007, it was Katrina Kaif’s wavy-haired, Christian bride look that had everyone talking. The actress was paired opposite Akshay Kumar in Namastey London, and her performance established her name in the film industry. Katrina’s off-shoulder gown is just exquisite.

The angelic bride in Sooryavanshi 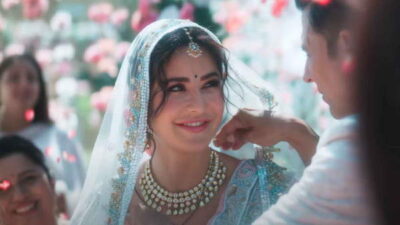 In her most recent look as a bride Katrina appeared as a beautiful bride in sooryavanshi with her blue embroidered lehenga complete with delicate details and light jewellery.her love song Mere Yara also gave us a glimpse of Katrina’s bridal look and has surely got us all excited for the vicky- Katrina wedding.

Different ways to drape a saree

Celebrity brides with secret messages in their wedding dress