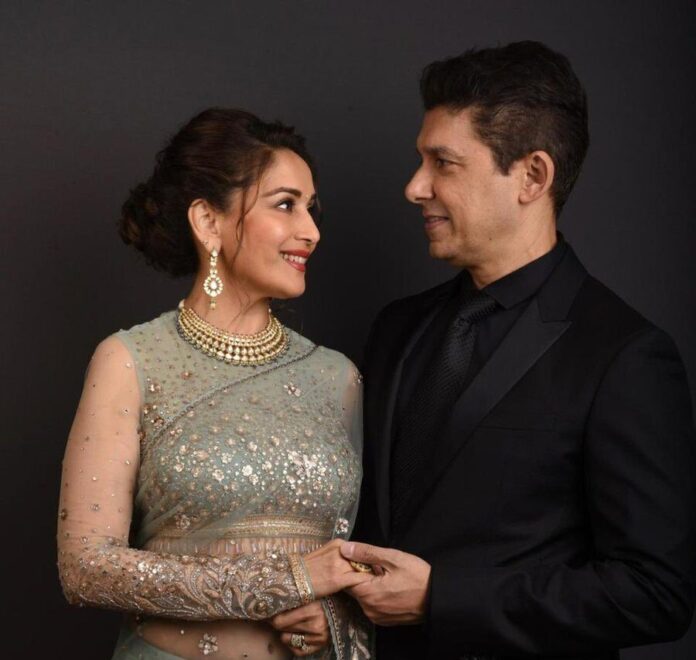 It takes only three winks for your heart to skip a beat, to know the one standing opposite is the one you’ll stand by forever, destined to be together. Madhuri Dixit Nene knew that Dr Sriram Nene would understand even the deepest recesses of her jumbled heart.

The Dhak Dhak Girl of Bollywood and a cardiovascular surgeon from the USA, Dr Shriram Nene, celebrated 23 years of being together this October as their beautiful love story continues to be one of B-town’s most praised and inspiring romances. Their love has only deepened with time in an industry known for testing love and its boundaries between two professionals. While their love story has been nothing less than a fairytale, they’ve had their fair share of ups and downs, but they’ve stuck by each other through storms and calm winds.

Madhuri Dixit Nene is a name synonymous with a performer par excellence — a name that has adaa in every move. Born and raised in a Marathi-Brahmin Koknastha family in Mumbai, she dreamed like any child, aiming to become a microbiologist. After six months of college, she dropped out to focus on her acting career in Bollywood. She made her acting debut in 1984 with “Abodh,” but her rise to fame and popularity truly began with the romantic thriller “Tezaab” (1988). Her consecutive charismatic on-screen performances constantly left the country in awe; every 90s girl aspired to be her.

On the other end was Dr Shriram Madhav Nene, a successful cardiovascular surgeon born in London and raised in the States. His parents were immigrants from India who left the country in 1962. Despite having a highly demanding and fruitful career as a cardiovascular and thoracic surgeon in the United States, satiety and belief that his abilities and contribution were limited, curing only a few patients at a time. The decision was made — to combine his original training as a software and hardware engineer with his commitment to patient care as a cardiovascular surgeon and develop a system that could scale medicine. With this goal in mind, Nene shifted to India in 2011, two years after his wedding to Dixit.

Dixit had to be friends with the limelight, being the most influential and biggest heroines of her time, whereas her husband, Dr Nene, still prefers to avoid the spotlight. Most people are usually intrigued about how a superstar met and eventually wed a US doctor. Despite their diametrically opposed occupations, their marriage is a testimony of brilliant divergent partnership. The amusing part of this bonding is that Nene had no interest in Bollywood and obviously no clue that he would marry tinsel town’s most desirable woman. Dixit met Nene at a party when her brother Ajit Dixit played cupid and introduced the two sparklings. In an interview, the actor spoke about their first meeting, “My brother had very sneakily invited his family over. It happens, right, when siblings invite people over for a party and then ask you later about one person? I’d always say I’m not looking for anybody. But this time, for the first time after a party, I knew someone would nudge me and ask if I liked him. And I did.” She mentioned that she was attracted towards Nene’s honest nature. Even though he had no idea who she was, he was curious about the real Dixit and the actor behind it.

Recalling the first date, Dixit confessed how horrified she was when Nene asked her on a mountain biking adventure when she hadn’t ridden one in 20 years. The actor had no idea what she was getting into and that it was too late to turn around. Petrified, she descended slopes with Nene that she had no idea was possible, probably a metaphor for the beautiful life ahead. For Nene, it was clearly too brave of her to do when it was clearly her time for such an adventure.

Utterly smitten with each other, they had clicked right away on the first day of their meeting. Boundaries were not going to limit their love for each other. They knew they were made for each other and that their union was destined.

The marriage between Dixit and Dr Nene was a secret affair. On October 17 1999, the duo tied the knot in the United States in a beautiful private wedding with close family and friends, far from the hubbub of the actor’s fame in India. The craze for Dixit was insane in the country; that could have turned into chaos if the wedding were to happen in India. The news of their marriage was disclosed to the media the next day by Dixit’s manager, shattering millions of hearts across the world. Following their marriage, an opulent wedding reception in Mumbai for the film fraternity.

The Screen and Beyond

After a brief honeymoon in Hawaii, Dixit returned to Mumbai to finish all her work commitments. Despite standing at the peak of her success, she shifted permanently to Los Angeles to stay with her husband — once again proving her clarity on priority towards life. The news caused many heartbreaks as no one knew about her return to the big screen. She talked about her life in the US in a post-marriage interview and how she loved being a housewife, leading a routine life away from the chaos. The couple welcomed their first child Arin in 2003 and their second blessing Rayaan two years later. Dixit decided to take a four-year hiatus from films to spend more time with her young children.

The Nenes may seem like they are taking a cakewalk; they experience the struggles of a married couple. In an interview, Nene expressed how every marriage faces challenges but that if there is love and understanding, any difficulty can be resolved. He first struggled with handling attention since he is a very private person, especially in India, but they have both backed one another through all of life’s ups and downs. Both went through a significant amount of hardship. Still, their stories beautifully illustrate how love and affection are necessary for a blissful life — that an enduring bond deserves to be cherished and celebrated forever.

The Ever So Charming — Rohit Saraf

Does your partner triggering you ? 3 simple ways to over...