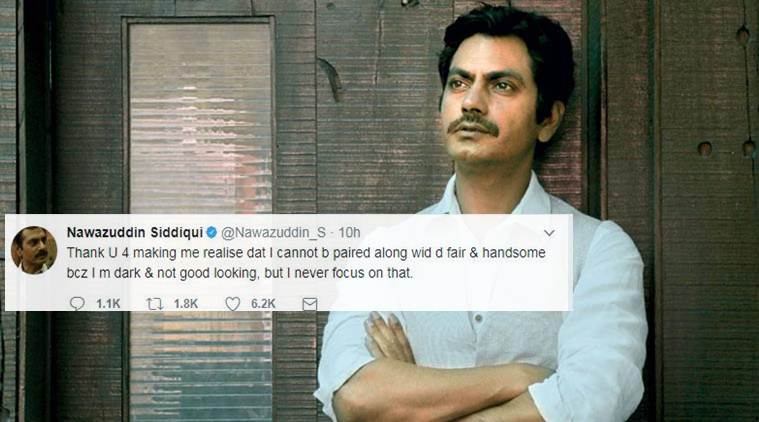 Earlier on Monday, Nawazuddin siddiqui tweeted, “’Thank U 4 making me realise dat I cannot b paired along wid d fair & handsome bcz I m dark & not good looking, but I never focus on that (sic).”

While promoting his upcoming movie Munna Michael, Nawazuddin Siddiqui talked about how he had turned his look to an advantage.

He said, “If my average look is my USP today, it is because I have linked it to my work. But we waste too much time over these things. Who is anyone to decide if I am ugly or handsome? Everyone is good-looking in their own way,” he said.

He further added that he does not consider himself as a star.

He disregards the fact that his image as a common man actor is something that makes him one of the most sought after star in the multiple circuits, with a large fan base.

It is his strive for perfection that prevents him from being bothered by the awards and award shows.

He says, “I don’t work for awards. If I do my intention as an actor becomes corrupted.”

In his upcoming movie Munna Michael, Nawaz would be seen matching hip hop steps, with dancing star Tiger Shroff. Excited about going mainstream through the movie, Nawaz says that this is his first romantic role, where he would be playing the anti-hero.

He has geared up for the upcoming struggle in his career, and is completely determined to keep reinventing himself as an actor.