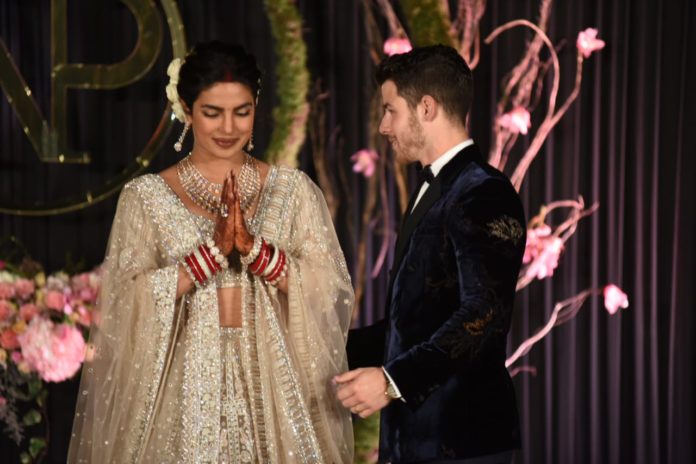 During Dec 1-3, 2018 many heartbeats across the nation stopped beating. Internationally acclaimed actress Priyanka Chopra married her beloved, singer Nick Jonas in a beautiful royal wedding. The sky was lit with fireworks with sparks renouncing their joy of the union on Dec 2 2018, as the couple joined each other to get married the Christian way. The celebrations had begun already a week before when the Chopra and Jonas clans prayed for the gods to shower blessings on the two at the Chopra residence in Mumbai.

For the wedding ceremonies, Taj Umaid Bhawan Palace, Jodhpur was selected. The exuberance of the events could be felt with heartfelt designer invites and wedding favours. The colours from Chopra’s extravagant organdy gown and blouse filled the sky at her mehendi. Wearing a multi-hued multi-panelled ensemble embellished with silk detailing, looking absolutely bright. Jonas flaunted the traditional subtle kurta pyjama. “One of the most special things our relationship has given us is a merging of families who love and respect each other’s faiths and cultures,” both wrote in a social media post after the ceremony. “And so planning our wedding with an amalgamation of both was so so amazing.”

Royalty had descended on earth when the two, enwrapped in the opulence of Ralph Lauren walked down the aisle to wed as per the Christian rituals honouring Jonas’ faith in the religion. Chopra wore a 75-foot long magnificent veil trailing the greens of Taj Umaid Bhawan Palace with only the fourth of Ralph Lauren Bridal Couture ever created by the designer. Jonas rose his look with a traditional tuxedo and had a lace attached to Chopra’s gown with ‘My Jaan’ (my life in Urdu) engraved on it. In the absence of Chopra’s beloved father, she was given away by mother Madhu Chopra smelting emotions in the country’s hearts. The ceremony was officiated by Jonas’s father Paul Kevin Jonas Sr. The evening witnessed the sangeet with a fierce dancing competition between the bride and groom’s families. The Ambani family, Sophie Turner, actress and sister Parineeti Chopra and Madhu Chopra marked the presence by dancing the night away.

Bollywood Weddings we were Rooting for in 2020