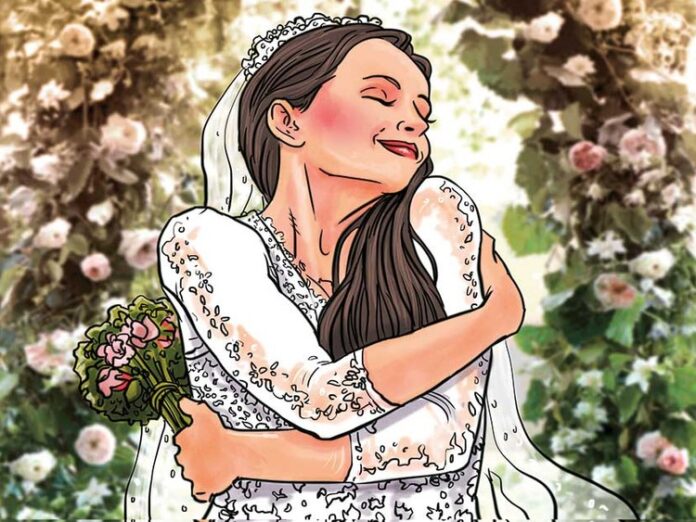 What’s a girl to do if she is in love with the idea of a fairy tale wedding and there’s no likely partner in the picture whom she wants to get hitched with? Well, she can just go ahead and marry herself.

In one of a kind incident, a 24-year-old girl from Vadodara in Gujarat decided to get married to herself in a practice called Sologamy. It is a wedding ceremony where people marry themselves, which has been a growing trend in the West over the past few years, and has now reached the Indian shores. Kshama Bindu will have a traditional Hindu ceremony due to take place on the evening of 11 June in a temple in the city of Vadodara, in the western state of Gujarat.

Decked up in her red bridal outfit, with henna on her hands and vermilion powder in her hair, the bride will do the customary seven rounds around the sacred fire. Ms. Bindu’s family has given their blessings and will be attending the ceremony along with her friends.

The only set-piece missing from the elaborate proceedings will be a groom and his entourage. But that’s the whole point of a solo wedding. The Sologamist gets to cut out the extraneous stuff and focus on the real star of the occasion — their own self.

Pre-wedding rituals such as Haldi (where turmeric mixed with oil is applied to the bride) and sangeet (music and dance) will be held earlier in the day. After the wedding, Ms. Bindu will visit Goa for a two-week-long honeymoon.

By marrying herself, Ms. Bindu said, she would be dedicating her life to “self-love”.”Self-marriage is a commitment to being there for yourself, to choosing the livelihood and lifestyle that will help you grow and blossom into the most alive, beautiful, and deeply happy person you can be. It’s my way of showing that I’m accepting all the different parts of me, especially the parts of myself that I have tried to deny or disown such as my weaknesses – be they physical, mental, or emotional. For me, this marriage is really a deep act of self-acceptance. What I’m trying to say is that I accept myself – all of me, even the parts that don’t look pretty.”

All this may sound a bit surreal, but the idea of “marrying” oneself isn’t new. It first made news nearly 20 years ago when Carrie Bradshaw, a character in the hugely popular American series “Sex and the City”, raised it. She epitomized a generation of modern western woman’s emotional, sexual, and relationship anxieties, and enacted what was probably the first solo wedding in the universe. But the show was a comedy-drama. Since then, reports say there have been hundreds of such “marriages”, mostly by single women. Brides have walked down the aisle dressed in pristine wedding gowns, carrying a bouquet, sometimes with families and friends cheering them on. And in one highly unusual case, a 33-year-old Brazilian model “divorced” herself three months after her “wedding”.

Wedding Businesses have also proliferated in many parts of the world, catering to the trend, offering wedding kits, including rings, vows, and affirmation cards that say things like “Hell yeah, I’m awesome”.

The news has also started a debate on social media. Some applauded her saying she would be an inspiration to many, but most people just tried to wrap their heads around the concept of Sologamy. Some even criticized Sologamy as “a bizarre and sad act” and blamed it on “chronic narcissism”.

The self-sufficiency logic is undoubtedly a powerful one. It’s almost as if solo weddings were a feminist act, an extension of the feminist slogan “A woman needs a man like a fish needs a bicycle”. The messaging seems to be that you don’t need a man to have a gorgeous wedding party, or, indeed, a marriage.