Home Fashion The Hairstyles of Westeros 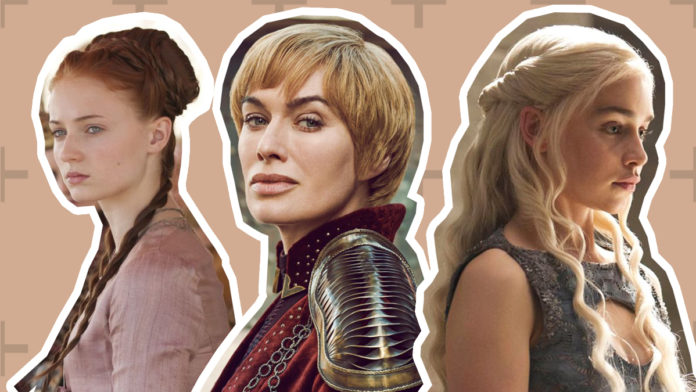 Game of Thrones (GoT) hasn’t been just a show but a feeling for the audience. All these eight seasons of sweat and blood, death and resurrection, and fire and ice have paved a beautiful journey for us. The amount of love this show has received compares to none, and the amounts of emotions this show has given us, are uncountable even. The strength portrayed by a number of characters, especially the female ones in the show has left an everlasting impact on us.

All the female characters exhibited great beauty, grace, and strength in them, that it is almost impossible not to draw inspiration. It is all beautifully incorporated in the way they dress-up and the way they braid their hair. Therefore, we list some of the greatest female characters of Game of Thrones with the most amounts of sass and the coolest hairstyles that you can rock this wedding season. Go show these pictures to your stylist now –

Among all the other GoT characters, Sansa’s hairstyles have actually carried a meaning with them throughout. From being ‘a stupid little girl with stupid little dreams’ to being the most bad-ass Lady of Winterfell, her hairstyles changed with the amount of power she earned. All her hairstyles have been very cool and whether you are a bride or a bridesmaid, or maybe just a guest at some wedding party, she has an inspiration for all kinds of looks you can carry this wedding season. Her favourite one, of course, is middle parting with little braids playing around.

One of the strongest characters of GoT, Cersei, went through a dramatic change after her Walk of Shame. But she has owned all her looks throughout. Her exaggerated updos from the initial seasons are the perfect inspiration for a bride who wants to go for a dramatic look. However, her pixie cut from the seasons later, with a crown adorning her hair can serve a lovely bridesmaid’s look.

Margaery has been the most stylish character in GoT without a doubt. Remember the time Cersei was jealous of her influence and used to mock the amount of skin-show in her dresses? Remember the time Sansa wanted to be like Margaery and copied her hairstyles? If these girls paid heed to it, you can definitely look great when you draw inspiration from her hairstyles. Be Margaery the attention seeker of the next wedding party!

We can all agree that Dany’s hairstyles have been even more twisted than most of the GoT plots. She has been given the prettiest, most intricate hairstyles of all characters.  This makes her the best inspiration for meticulous hairstyles that can pair beautifully with lehengas this season.

Catelyn was the fiercest Lady of entire Westeros. The things she would do for family and honour. The love she splurged on her children. The relationship she shared with Ned Stark. She was the one to look out for. Her hairstyles too had been totally homely and comfortable. She is a great example of simpler hairstyle inspirations from GoT.

Swimwear fashion in the history of Bollywood

Varun Bahl – In a Conversation with W.A