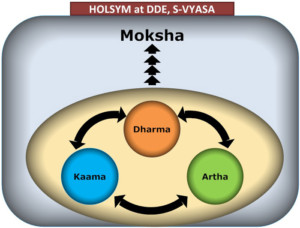 This lesson explains the three permissible goals of Hindu life. In doing so, it will define the ancient concepts of Kama, Artha and Dharma.

Since life’s duration is uncertain, a man and a woman need these three requirements of life to be fulfilled in such a way so that none of them remain prejudicial to one another.

According to the symbolic etymologies (Nirukta), the root of the word Dharma means “that which supports the world”. Virtue is of two kinds, inclination toward certain actions and detachment from others.

According to Mahabharata, the word dharma has a very wide meaning. It comes from the root dharna ‘support’. Dharma also refers to:

The means of attaining future results by conduct required by the Scriptures.

Of what use is it to practice virtue, when its results are uncertain?

Doubts arise as to the necessity of ethical behavior in matters of virtue. There is no ground for virtuous behavior, since the benefits that might be obtained by it in the future are uncertain. It is said that the results of sacrifices and other rites are not to be bad in this world, but in the next. The ordinary virtues are non violence, honesty, chastity, avoiding anger, and envy, striving to love all livings beings equally. Be equal towards all beings.

Artha signifies material goods, wealth. Artha consists of acquiring and increasing, within the limits of dharma, knowledge, land, gold, cattle, patrimony, crockery, furniture, friends, clothing, etc. According to Artha Shastriya of Kautilya, Artha is the means of existence of mankind. Dharma applies to the spirit and artha to the body. Money is the basis of royal power. Life’s journey is based on it. In order to live, the use of material goods is indispensable. The sluggard will never prosper.

Virtue and prosperity are the fruit of love. To be happy, virtue and wealth must be sought. They only give results at the price of great effort.

Eroticism predominates in adulthood. Kama is the perception of the power of illusion materialized in an object, since from perception is born desire, attraction, ardor. The tendency to possess oneself of these objects of the senses is eroticism. Eroticism is of two kinds, general and specific. Kissing, biting, and scratching with the nails, which serve to augment the erotic charge of both men and women, belong to general eroticism. They are not considered forms of possession. The Kama Shastra teaches respect for the union of the sexes. Pro-creation and problems connected with the sexual organ and copulation merit respect, since they concern the evolution of the human species and cause esteem and affection for the partner, as well as the pursuit of his/her well-being. Ignorance of, or scorn for, the rites of the Kama Shastra is a source of quarrels, incomprehension, break-up, unfaithfulness, frequenting courtesans, rape, practices against nature, and bad morals.

Wise men choose ways of acting that allow them to achieve the three aims of life without letting the pursuit of pleasures lead them to ruins.

Slay Your Shaadi in Sneakers

A Traditional Tale of Kuldevi Parampara