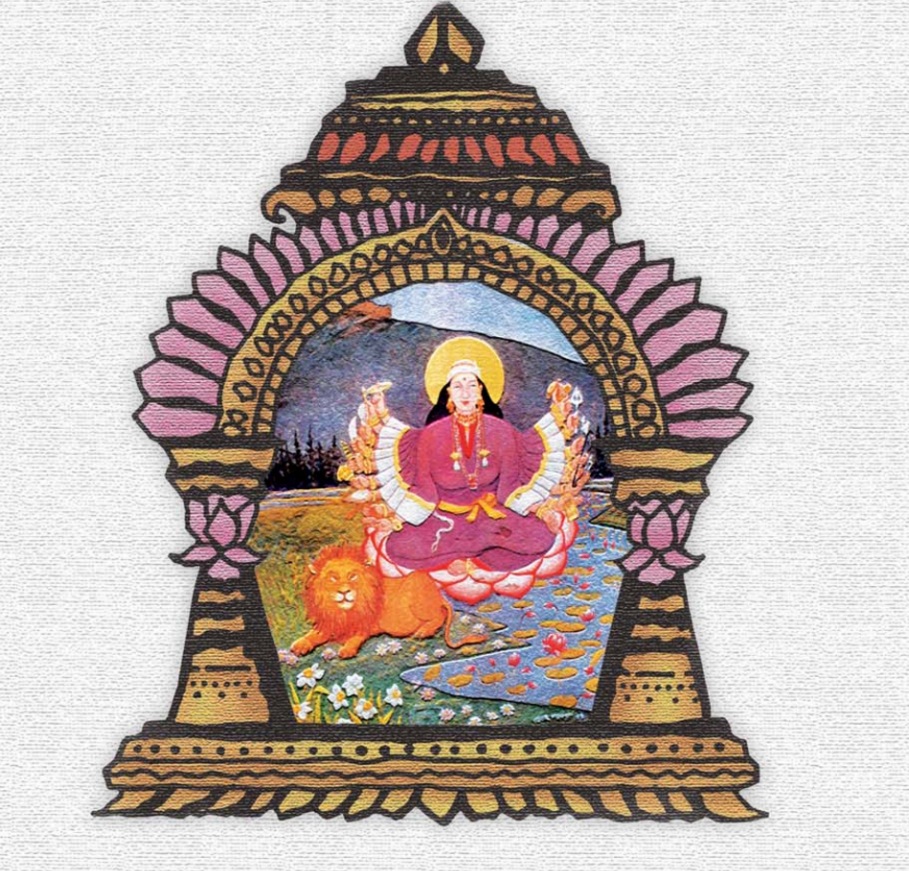 India has an ancient tradition of the Mother Goddess worship. The statues that were found In the remains of the Mohenjo-Daro bear testimony to the fact that the ancient man had a deep-rooted conviction about a divine Mother who he believed to be the creator, sustainer and destroyer of the universe. The tradition of Kuldevis probably arose from there. Most Indian castes and communities have their own ishta-devi, some have an ishta-devta or Kuldevta (kul etymologically means clan and devta means deity).

It is believed that the Kuldevi’s idol must be kept at home and worshiped by the family. If the family has to shift to another house, the idol must be carried along. The house that worships its kuldevi is blessed. Some clans also have animal figures as a deity, e.g. the King Cobra or the Nagraj is a popular deity amongst Hindu, Jain and Kshatriya clans. It is known as Nagdevta or Nagbapji, some Kshatriya clans also call themselves Nagvanshi or descendants of the Nagas. In Bihar there is a tradition, that a young bride keeps a fast for fifteen days and worships the Nagdevta or the Cobra figurine during the first monsoon season that falls after her marriage, in the fortnight called Madhushravani. It is believed this ensures the safety and long life of her husband. In Bihar, Himachal, Uttarakhand and the north-east India, the groom both before and after his wedding does the Kuldevi/Kuldevta puja. In the north of India in Kashmir three Goddesses are the Kuldevis of the Hindus namely Mata Jwalaji, Ragyaji and Kheer-Bhawaniji. Jwalaji is the brightest, Ragyaji is milder in comparison and Kheer-Bhawaniji is considered the mildest Goddess temperamentally. These devis bless and protect their respective clans and after a girl marries a boy of a different gotra she embraces the Kuldevi of the groom’s clan and all their customs. The couple seeks blessings of her during the navratras in April and October, keep fasts and worship the Goddess on the festival of Sonth, Navreh and Dussehra. Kheer-Bhawaniji resides in the Tulmul lake outside Srinagar and her temple is flocked by thousands of devotees every year. Newly-weds go for her darshan. Ragyaji resides on the Hariparwat (the mountain of God) in Srinagar and her temple is on a hill. It is also called Sharika Parvat where the Goddess Sharika is worshipped since ancient times. Myth has it that a long time back, some demons troubled the local people, who prayed to Goddess Durga for protection. She took the form of a Sharika (Maina) bird and dropped a large chunk of earth on the entrance to the cave of the demons to seal them inside the hill. She then settled on the hill to ensure that they did not escape. This gave the name Sharika Parvat to the hill. The Goddess is represented there by the Sri Chakra (a regular geometrical mystical pattern) in sandy rock, which is anointed with red vermillion (sindur). The deity is also called Chakreshwari. Regular worship has been offered at this shrine for centuries.

The Jwalaji temple is an open temple in Himachal, where the jyot or the flame burns bright since centuries. A myth says that many Muslim rulers tried to extinguish the flame but couldn’t do so because they failed to locate its source. The newly-wedded couples flock the temple, along with other devotees to seek Jwalalji’s blessings. There are interesting stories about Goddess Kheer Bhawaniji. It is said she was held captive by Ravana the demon-king in Lanka. She was rescued by lord Hanuman on whose shoulder she travelled from the south to the spiritual land of Kashmir and she liked the Tulmul marshes and descended there. During this trip she became a vegetarian and ever since all devotees are served kheer and puris in her temple. No non-vegetarian edible item is allowed inside the premises.

Devi Roop Bhawani is also a greatly revered Goddess in Kashmir area. Aparna Dar in Koshur Samachar wrote about her legend. Roop Bhawani was born in Srinagar on Jyaistha Paurnamasi, AD 1621. She was an illumined soul who was said to have been born of the elements of Divine Mother. Her father Madhavju Dar was an ardent worshipper of Devi Sharika. It is said he was worshipping the Goddess one day when a divine little girl appeared out of nowhere in the temple. On seeing this divine child, Madhav was so filled with bliss that he shed tears of joy and his devotion flowed from his eyes. He was sure this child was the mother of the Universe, Mahamaya. He worshipped the girl, placing flowers at her feet and lighting incense before her. She was pleased with the simplicity and love of her devotee and granted him a boon. Madhav requested her to take birth as his daughter in his house. The girl promised that and disappeared. So goes the legend of the birth of Roopa Bhavani. In the following year 1621, in the month of Jyeshtha, on the Poornima Tithi (full moon), in the early morning a daughter was born to Madhav Ju’s wife. Her name was Alakshyeshvari, which means one who is imperceptible and indescribable; it refers to the Goddess in the formless non-dual aspect. When she grew up she was married to Hiran and Sapru but her married life was joyless and unhappy. Legend says she performed many miracles but people did not treat her well. Soon she left all worldly ties and decided to walk on the spiritual path. She performed sadhana at a solitary retreat, in the north-east of Srinagar, known by its ancient name Jyestha Rudra. She did intense tapasya (austerities) for twelve and a half years, and began to glow with divine grace. Her spiritual radiance made people call her Roopa Bhawani. They flocked to her so she decided to shift to a village Mani Gaon in north Kashmir, on the banks of the Ganges in the foothills of Himalayas. In beautiful surroundings, on a forested hill-top, far from people, she made a hermitage for herself and remained there alone with her God doing spiritual practices. After many years, yearning to be released from her earthly body, her soul took flight on Saptami Tithi, in the month of Magha, in the year 1721. The legend relates how her devotees, filled with grief, carried her body towards the cremation ground and met a man who informed them he just saw her walking past. When the devotees checked they found some alak (locks-of hair) and some flowers in place of her body. The alak are worshipped even now. Her songs known as Vakhs are greatly celebrated, sung widely and are fine specimens of very sensitive poetry.

According to Pandit Deepak Sharga, the Kuldevi tradition is a pan-Indian one and not confined to just north of India. It is popular in south of India too and the deities play an important role in marriage-rituals and ceremonies. In Andhra Pradesh, Goddess Vasavi Kanyaka Parmeshwari is the kuldevi of the Arya Vyasa community. In Tamil Nadu many Brahmins as Iyers, Nadars, Maravars and some Vellalars worship Goddess Kamakshi and Lord Murugan as kuldevi and Kuldevta. Majority of Chettiars and Vellalars worship Goddess Angala Parmeshwari as their Kuldevi. Naidus and Brahmin Iyengars revere their Kuldevta called lord Narasimha. kuldevis are popular amongst Brahmins and Kshatriyas of Goa, Karnataka, and Naharas which are Konkani Saraswats and Daivagna.

Kuldevta temples are found in Goa also in abundance. Some of the revered kuldevis are Shantadurga and Mahalaxmi and kuldevtas are Nagesh, Mangesh and Ramnath. Couples before and after marriage, worship them as per their cultural traditions and norms and seek their blessings before every auspicious occasion as engagement, wedding, buying property, childbirth and during festivals and fasts too. The kuldevi is hence the guardian angel of the family to be turned to, for blessings and guidance on every occasion in the married couple’s blissful life.

A Happy Outcome For Couples On Vasant Panchami

Say ‘I Do’ at The Taaras Beach & Spa Resort

Kanyadaan for a Blessed Bride

5 Zodiac Signs Most Likely to Commit to Marriage