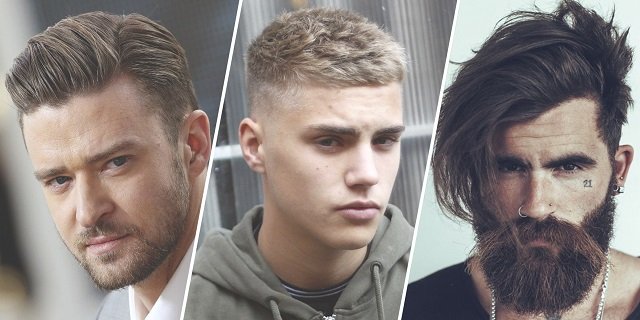 Boys and men wearing the cliché short hair look with absolute no styling, this is now history. Men’s fashion has been running neck to neck with women’s and we are loving this healthy competition. As we see more and more evolutions in the male category, the hair also plays a pivotal role in shaping the fashion for men. So, today we are going to look at some in-vogue looks that we would love our men to carry in their classic backstreet style –

This is the ideal haircut for men in summer. Buzzcut is the one in which the hair is trimmed to the most possible level, closest to the scalp. The length of the hair is less than an inch and is the same throughout the skull. This is a raw hair look for the men as it gives military vibes. It has been gaining popularity when several celebrities have been sporting it for a while.

A classic dinner hair look is the slicked-back hair. No matter the length of your locks, all of it is gelled up and combed back to serve a clean hairdo. One has to be cautious while donning this look as it might look too slimy if not done right. Also, men with a broader forehead might want to consider it again. Slicked hair is trending due to its sophisticated vibe that looks super chic with almost any outfit.

All eyes on this one. Recently K-pop and K-drama are ruling the world’s social media feeds and so are their cultures. One of the most significant aspects of the Korean lifestyle is their hair and respective hairdos. Their famous curtain bangs and low falling hair cut have been trending amongst the youth, especially Gen Z. In most cuts, the hair is kept short till the level of the ear and cut proportionately around the head. Curtain bangs are provided on the front to give a more relaxed and boy-next-door look.

Another laidback look is the beach curls. Many fashion influencers have been trying to attain the perfect loose curls look and they have been successful at it. These throw out that ultimate cool boy vibe who everybody wants to be friends with. Men with naturally curly hair are embracing their gifted twines, while others with comparatively straighter tresses are all in for an uber chill look.

Men have been dying their hair for quite some time, however, now the shades have been changing. From opting for the same old goldens and browns, the focus is slowly shifting to muter pastel tones like sky blues and ash greys. Hollywood stars like Zayn Malik and Adam Levine have done a spectacular job at sporting such colors and setting examples for the men out there.

A reformed version of the buzz cut is the undercut.  In this look, the hair above your ear area is trimmed to the shortest length, while the hair on your crown remains as it is. This cut is the go-to for men who wish to add layered texture to their hair. It also makes their dreads more manageable as all the length sits on the top of the head, rather than the sides which need more attention. The undercut is a more urban look when it comes to styling it with your outfits.

This one is for the risk-takers. Long hair is pretty difficult for men to carry, given the fact that they have been living with shorter ones for a very long time. But times are changing, and we can see multiple fashion models sporting the look effortlessly. Even cosmetic brands are endorsing commercials that showcase men with extended tresses. It is classy of course and adds up to the personality too. Longer hair is more flexible for styling differently, thus it has been creating buzz in the market. Lengths vary from keeping it till the shoulder to moving it way back down till middle waist.

Hot and Trending Wedding Accessories for the Groom

Effective tips For Groom Makeup That Every Man Should Include Before...