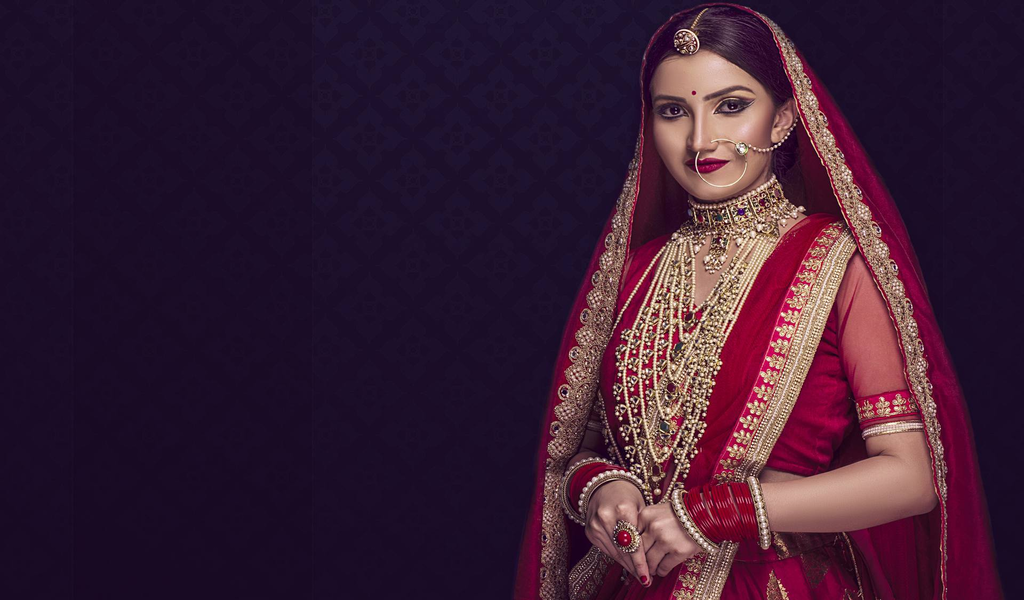 Rajasthan, which literally means ‘the abode of kings’, is the largest state in the Northwest region of India. The mystical Thar desert, the majestic palaces, ancient forts, awe-inspiring Havelis and the fascinating history of princes and princesses, make Rajasthan the most romantic wedding destination in India. In a heavy Gota Patti embroidered Rajputi poshak and equally rich and heavy Rajputana jewellery, the Rajasthani bride resembles a princess from the rich royal history of Rajasthan. The Mughals had a significant impression on the state and nowhere is it more evident than in their jewellery. Rajasthan is world-renowned for its different jewellery styles. Let’s have a look at the wedding pieces of jewellery for the Rajputi brides.

Kundan jewellery is an ancient art of jewellery making was conceived in the royal courts of Rajasthan. Since then, Jaipur has been the centre for Kundan and rajputana jewellery. Traditionally, it was made with gold and unique glass stones – Kundan stones. Nowadays they are made of gold and uncut diamonds and other precious and semi-precious stones. Thin foils of highly refined pure gold or ‘Kundan’ are beaten and stuffed in between the gold framework and the stones to create this style. In some cases, the reverse side of the jewellery is enamelled in colourful Meenakari designs. This variation is called Kundan Meenakari. Polki jewellery is made exclusively with gold and unfaceted or uncut diamonds. Hence it is generally more expensive than Kundan, although both follow the same process of jewellery making.

The ancient art of Thewa jewellery is a blend of gold and glass while the colourful Jaipur Meenakari jewellery is a fusion of gold with different colours and beautiful artwork. The Rajasthani bride bedecked in heavy Kundan and Polki jewellery from head to toe resembles a Rajput princess in all grandeur. The maang tikka is called ‘Rakhdi’ or ‘Borla’. It is a signature piece of the state because unlike other styles, it usually ends in a huge bell-shaped or spherical piece in embellishments of precious stones. The ‘Sheeshphool’ is a chain of small rakhdis which forms a headband. Some wear ‘Khaancha’ in addition to sheeshphool. The Khaancha is a band worn on the upper forehead and has the Rakhdi attached at its centre. The ‘Nath’ or ‘Nathni’ is a huge nose ring on the left nostril and has a chain of pearls or precious stones, which carry it to the hair.

The rajputana earrings worn are usually a variation of the jhumkas known as ‘Kundan Bhutti’, while other favourites – Surliya/ Kaanbali/ Jhaale are different versions of danglers. The collar neckpiece called ‘Aadh’ is a signature style of the Rajasthani bride. It is a broad and heavily decorated pendant which adorns the collarbone. The choker necklace of uncut diamonds called ‘Timaniya’ is another favourite. The waist long, heavily embellished necklace called the ‘Raani haar ‘ which means Queen’s necklace is a must for a Rajputi bride. A set of two gold bangles called ‘Bangadi’ is also accompanied with broad gold bracelets called ‘Gokharu’ or bracelets of white pearls called ‘Gajara’.

‘Choora’ are red bridal bangles made of lac which are accompanied with gold bangles encrusted with precious stones and diamonds. ‘Balaiya Kada’ is a broad flat bracelet which is popular among youngsters. The waist chain called ‘Kamarbandh’ or ‘Kardhani’ or ‘Tagdi’ made of gold and Polki or Kundan accentuates the waist. The armlet is called ‘Bajubandh’ and is made of gold and precious stones or Meenakari designs.

The elaborate ‘Haath Phool’ designs are a testimony to the Mughal influence on Rajasthan. It consists of a statement centrepiece which is joined to the rings on each finger and the wrist, with chains of gold and precious stones, decorating the back of the palm and wrist. ‘Bichiya’ which is a toe ring, usually made of silver and stones, is a mark of a married woman and is gifted to the bride on the eve of the wedding. Anklets also known as ‘Payal’, made of gold and precious stones adorn the bride’s feet. So, brides!

Versatile Jewellery Pieces for The Minimalist in You

Bridal Chooda Designs that have Our Hearts

Pros of going floral with your wedding jewellery