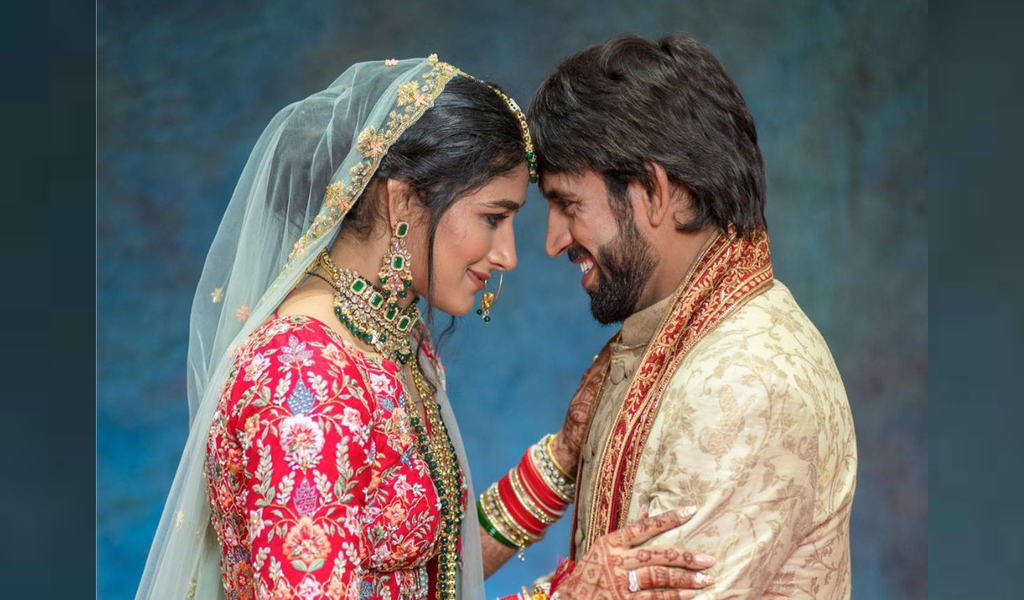 India’s star wrestler Sangeeta Phogat and world number one wrestler Bajrang Punia are husband and wife! The wrestling star shared glimpses from her pre-wedding ceremonies on Instagram along with her sisters. As per a report by Navbharat Times, the youngest Phogat sisters’ wedding took place in Balali, Haryana, on November 25. Only close friends and family members attended the ceremonies following the COVID-19 protocol. 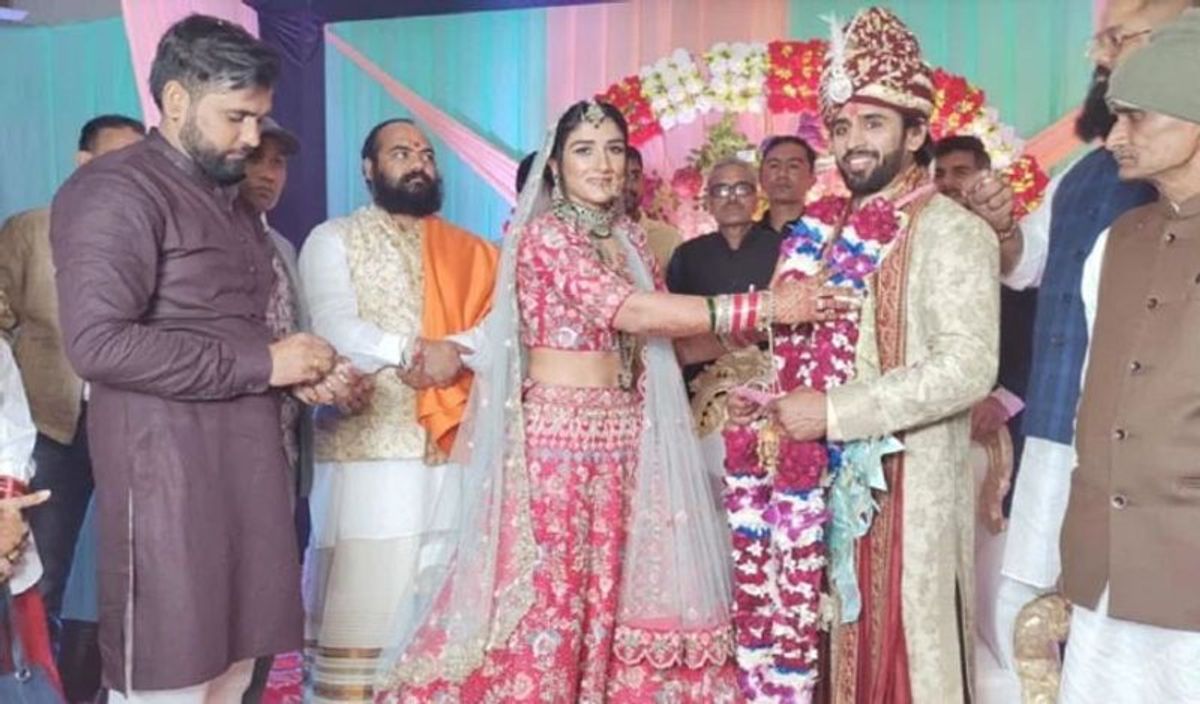 Starting from ‘Haldi’ and ‘Mehendi’ to the wedding reception, the couple had an elaborate ceremony planned for their near and dear ones. In a post on social media, the youngest of the Phogat sisters shared images from her wedding and captioned it, “You complete me. Soulmate for life. A new chapter of life would be full of love and happiness.” 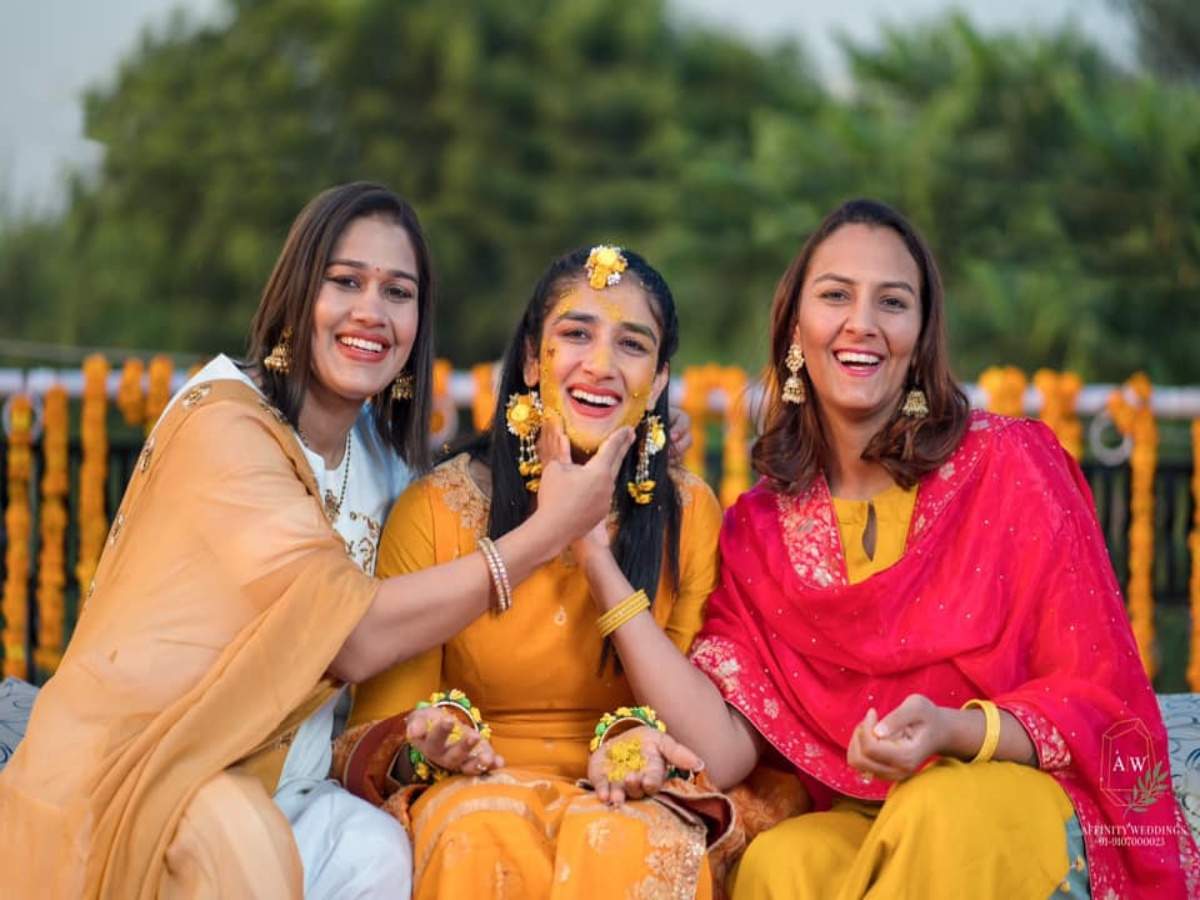 Her Haldi photographs show her wearing floral jewellery and dressed in yellow, twinning with sisters Geeta and Babita Phogat of Dangal fame. In the first picture, the three sisters are smiling ear to ear for the camera. The next two family photographs also show the Phogats posing for the camera, with a backdrop of marigolds to go with the yellow theme.

In a heartfelt post, the 26-year-old groom also announced the news. He said he is very excited as well as nervous to begin this new chapter of his life.

About the Couple & 8 Pheras

Punia, who is a Khel Ratna and a Padma Shri awardee, and top-most wrestler in his weight group in the world, belongs to Khudan village in Jhajjar district and is presently, living in Sonipat.  Sangeeta Phogat is the younger sister of the Dangal girls—Geeta and Babita. Sangeeta is also a wrestler. 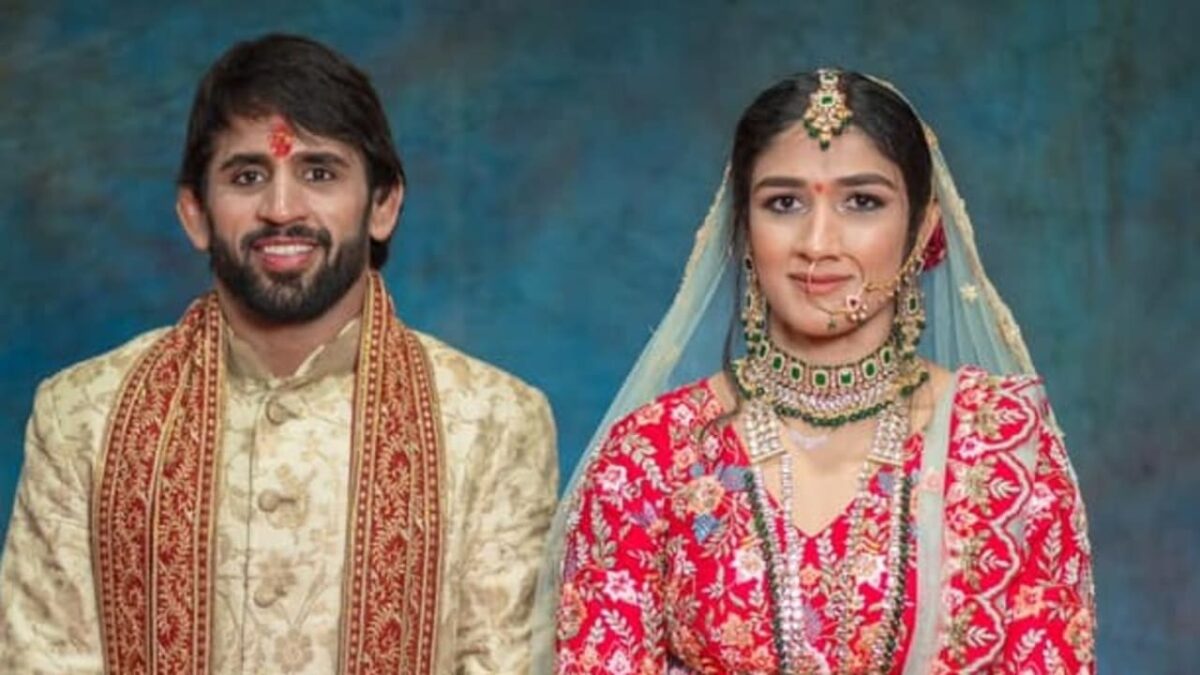 The newly-wedded couple took eight ‘pheras’. The eighth ‘phera’ was dedicated to the girl child as they vowed for the ‘Beti Bachao Beti Padhao’—a government campaign.

Sangeeta’s father, sisters—Geeta and Babita, and coach expressed their happiness over her marriage.  Punia has represented India in 65kg weight category. He has won three medals, including one in silver, and two bronze, in world wrestling championships.

Announcing their winter wedding earlier in August, Sangeeta had said that they wanted to get married before moving their focus on Tokyo Olympics, rescheduled to July 2021. Previously, she had said in an interview to Wrestling TV, “We (Bajrang and I) do not talk about marriage a lot. He currently focuses on the Olympics and is working hard for it. He has my full support and the wedding can wait if it has to”.