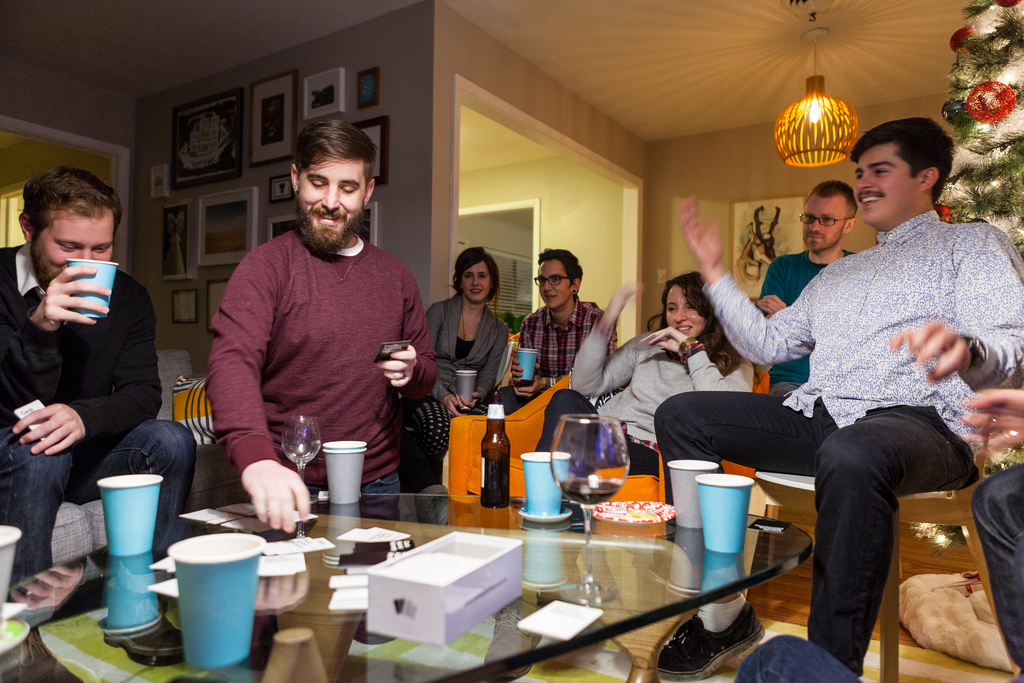 Are you in a party mood? Spice up your party with some mind blowing games while the alcohol pours like there’s no tomorrow!

Throwing a killer house-party can be a great way to hang out with your friends and also have a gala time, meeting new girls, who’s always tagged along with someone or the other. Games that involve alcohol are always a good idea to have fun—girls mellow down, get less defensive and there is that feeling of goodwill that a nice high brings.

Starting a conversation with a girl no longer seems daunting after you have been playing these games. Remember these parties are like the best place to hook-up with women, as they feel safe and happy in friendly surroundings and more open to men than they would ordinarily be if you met them, say, at a pub.

So sharpen your flirting skills and play the field like a maestro!

Drinking is fun but make sure that you don’t just gulp down shots and then pass out in the middle of the party. Don’t be a spoil sport by doing that. Sometimes, it’s a lot more fun to stretch the fun for the whole night. So take your time to finish a drink, get a little tipsy and not completely high to enjoy the night.

Never Have I Ever…

‘Never have I ever’ is one of the naughtiest drinking games of all times and has the potential to reach to steamy questions. If there’s a hot girl who has caught your attention, then this is a fun way of knowing what she is really like before you approach her. There are fair chances that a girl will reveal all her dirty secrets, and once she lets everything out, you know how to bell the cat. Give the game an innocent start so that everybody is quite chilled out.

The person who starts with the game has to say something sexual that they have not done and anyone who has done has to take a sip from their drinks.

To play Russian roulette you need to gather your shot glasses. This one is definitely not for the lily-levered, so start this game only when you have a group of people who can drink like a fish. First fill all the glasses with water and one with vodka. Shuffle the glasses until no one can be sure which glass has vodka in it. Everyone picks a glass and drinks and whoever gets the Vodka has to perform whatever dare the group decides. As the game progresses, raise the number of glasses with vodka in it. The stunts people pull will be nothing less than hilarious by the time a few drinks are down. One trick that will make the ladies adore you; be a nice guy when it comes to giving them a dare, they will know that you went easy on them and will appreciate you more.

Aditya Chopra, an engineer, swears, “I was playing this game with a bunch of friends. Every time the girl I liked got a dare, I would ask her to do something cute and safe and when she realized that I was trying to protect her, she opened up. That night I not only got her number but when she was dared to kiss she chose me.”

Spin the Bottle is a classic game everyone plays with friends, especially on a booze party. Sit in a circle, alternating between guys and girls and take turns to spin the bottle. When the bottle stops spinning, kiss the person who it points to and also drink a shot. Making the game naughtier, if the bottle points at the same person twice then the penalty is that they get to be alone for five minutes to make out.

Aaradh Dave, a student, says, “Well I have loved and hated this game. I was playing this and trying to point the bottle at this hot girl, I wanted to hook up with. The first time I was lucky and I got to kiss the softest lips but then it kept pointing to her not-so-pretty friend who had braces on, and I had to kiss her too.”

Play this game only after everyone is a little tipsy. You are going to exchange a lot of lips and tongues in this game. Excited? Stand in a small circle, alternating between girls and guys and start the game of Suck and Blow by placing a square-card flat against the lips and sucking the air so that it stays in place without using the hands. The objective is to pass the card to the person on your right without dropping it. This can be done by one person sucking the card while the other one blows at it gently! If they drop the card then both playing contestants have to take a drink and kiss. To make the game spicier, every time the card is dropped, cut it in half so that as time progresses, it becomes more lips and less cards.

Anshul Sharma, a marketing professional, shares, “We were playing this game at a party, but instead of a card, we were doing it with an apple. When it was my turn to pass it to the girl I’ve been checking out, I purposely dropped the apple and kissed her. It was the hottest kiss, she tasted like apple. And since the ice was broken, I easily asked her out.”

All you need for one of the most mischievous games, Flip, Sip or Strip, is a coin to flip besides alcohol, and a wild imagination. Flip a coin and guess if it’s heads or tails. If you guess it right, then you don’t have to do anything. But if you’re wrong, you drink a shot. Get it wrong twice and you have to remove a piece of your clothing. Just remember to wear as many layers as you possibly can. You don’t want to be the only one sitting almost naked, drowning in embarrassment.

Truth or Dare is a staple party game. Play this in the beginning and keep adding your own twists for added excitement. Each person takes a turn at truth or dare, but everyone else has to have a drink, every time someone performs a dare. Don’t be aggressive, remember it’s a game. I know you’re itching to play it hard and fast but you don’t want your guests to feel uncomfortable. Be charmingly naughty, after all, few girls can resist a rogue. Another thing, be sporty about whatever Dare you are allotted. No one likes whining and if others see you playing it with this attitude then they too will feel comfortable doing weird stuff.

Okay, so at last a game which answers your heart’s desire. In Blind Mate, a person is blindfolded and then he/ she has to touch one part of someone’s body and guess who the person is. For every wrong guess, the person has to drink a shot. Three wrong guesses and the person’s allotted a dare to perform that the group decides.

Milind Roy, photographer, says, “I played this game in a college party. While I was being blindfolded, I thought I saw a hot girl hinting to others that she would ask me to touch her thighs. I started slowly running my hand on the skin as slowly and sensuously as possible. When my time was almost over I said her name and everyone rolled on the floor laughing. I discovered, I was actually running my hands all over my friend’s arm. I was so embarrassed!”

So now that you know some of the many offbeat yet cheeky boozing games, your house is going to turn into a party haven. Call-up some of your old friends you are most comfortable with, stock your fridge with drinks, play some reviving songs to amplify your mood and get going with these naughty drunk games that are sure to give everyone a buzz.

So, are you game?

From Milestones to Memories