With the outbreak of Covid-19, cinemagoers aren’t able to enjoy what they love the most. There are no films releasing in theatres! As a result, some of the major movie releases have been pushed back. New projects have been cancelled. Hence, the film industry is incurring huge losses.

The silver lining to this situation is that many filmmakers are now turning towards OTT platforms to push out their content. Thus, movie buffs can now heave a sigh of relief. They will be able to enjoy new releases, albeit a new way. Wedding Affair brings to you four such films that will soon released on OTT platforms. 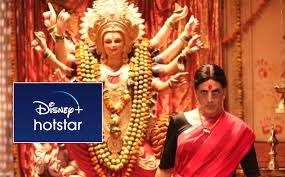 An upcoming 2020 Indian Hindi-language comedy horror film written and directed by Raghava Lawrence in his Hindi directorial debut. It is a remake of the Tamil film Muni 2: Kanchana and stars Akshay Kumar, Kiara Advani and Sharad Kelkar. The film was supposed to hit the theatres on May 22, 2020. Since there’s a lot of post-production work left, the makers may release it digitally in June.

This film is one of the few films releasing on Disney+Hotstar. Grab that packet of wafers and enjoy your films like never before. Akshay Kumar’s other film Sooryavanshi might also see an OTT release. Though nothing has been confirmed regarding the release of the film. Sooryavanshi also stars Katrina Kaif, Ajay Devgn and Ranveer Singh.

Featuring stalwarts Amitabh Bachchan and Ayushmann Khurrana. The family comedy-drama film was expected to see a April 2020 release. However, the film’s release has been delayed. Earlier, director Shoojit Sircar had said in an interview that he’s open to a digital release and will decide on it after May 3. Going by Amitabh Bachchan’s Instagram post, the film is headed for a digital release and the rights have been acquired by Amazon Prime Video.

The film will be streamed starting from June 12. Fans are dying to see Bachchan and Khurrana come together for the very first time. Senior Bachchan’s look in the film has also created a lot of buzz. Khurrana’s last outing Shubh Mangal Zyada Saavdhan received quite a positive response.

Headlining the cast of this directorial we have Sidharth Malhotra and Kiara Advani. Shershaah is a biopic based on the life of Param Vir Chakra awardee Captain Vikram Batra. The film is expected to release on July 3. However, given the uncertainty around re-opening of movie theatres, the makers are reportedly negotiating with Netflix for an OTT release. Giving us one more reason to binge-watch on Netflix.

Ghoomketu is a drama comedy film written and directed by Pushpendra Nath Misra. The film stars the very talented and versatile Nawazuddin Siddiqui, Ragini Khanna, Anurag Kashyap and Raghuvir Yadav in pivotal roles. Also featuring Amitabh Bachchan, Ranveer Singh, Huma Qureshi in cameo appearances. The film will be available for streaming on ZEE5 from May 22 onwards. Lately, ZEE5 has been the hotspot of meaningful content.

Also Read: Here’s what Bollywood munchkins are up to these days

His & Hers Latest Issue

Mystery series you can watch this weekend

Summer flicks you can watch this weekend with family

Biopics we are waiting for with bated breath