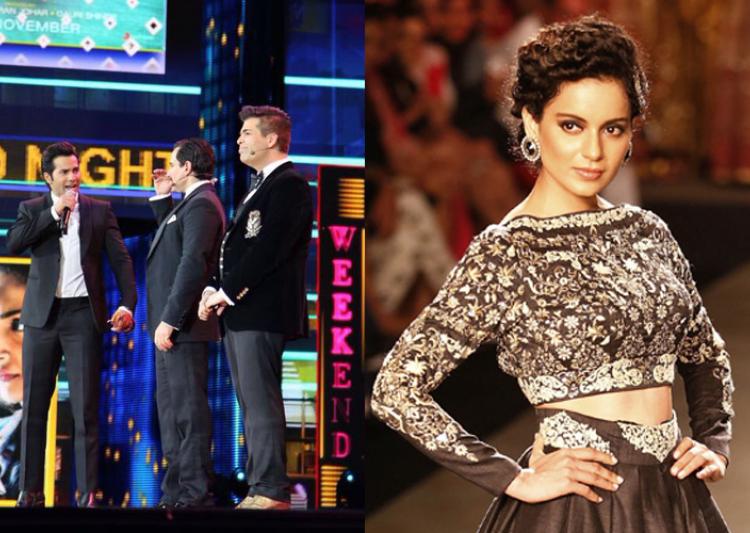 While hosting the IIFA’17 in New York, Karan Johar, Saif Ali Khan and Varun Dhawan took a dig at the brouhaha on Nepotism by chanting “Nepotism Rocks” at the event, when Varun Dhawan won the award for the best performance in a comic Role for Dishoom.

Post the controversy, Varun Dhawan apologized for the act, with Karan Johar in tow. In an interview with NDTV, the director took complete responsibility of the joke and claimed that it was entirely his idea.

He said, “Of course I don’t believe that ‘nepotism rocks’. Of course, I believe that only talent rocks. If anything that rocks, it’s your talent, hard work and conviction. It’s the energy you bring to your job. What we said was meant to be a joke, which I think has been misplaced, misunderstood and I think it went wrong. I regret it.”

He said that with this interview he would like to end the conflict and ensured Kangana and his fans that he would no longer bring up nepotism or Kangana’s name.

Addressing the issue further, Karan Johar added, “No matter what I say or feel about my issues with what Kangana said on my talk show Koffee With Karan, I think I was raised to be a dignified, a chivalrous, and a decent person. That’s the upbringing that I was given and I feel that I failed on those accounts. I felt that no matter what my thoughts or personal issues on this, I should not have repeatedly brought that up. For that, I’m deeply regretful.”

The Nepotism debate had begun earlier this year when Kangana Ranaut had called the director “the flag bearer of nepotism” during her appearance on his talk show “Koffee with Karan”. Karan Johar did not take this well.

Unseen Pictures Of Your Favourite Couples That Will Make You Go...