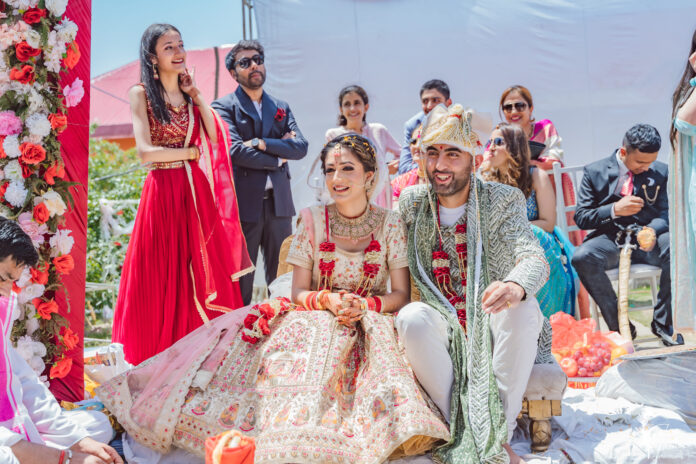 Indian weddings are all about deeply rooted traditions and customs with abundant colours of happiness surrounding them. Himachali weddings follow the same route with a guided blessing from the mountains and the valleys, standing tall to ancient rituals.

Weddings are usually considered as opulent and exorbitant affairs. When it comes to Himachali weddings, they bring a difference with their minimal approach circumferenced by age-old rituals. The people of the Himachal region are as warm as their sunlit mountains. The same is reflected in their traditions. Their customs are profound and take a lively stand against the contemporary evolution of weddings. Himachali weddings last for around 2-3 days. If you are yet to attend one such wedding, here’s a chance to learn everything about the wedding in this gradual coverage.

Roka is the first step towards the union of the two souls. It is the ceremony where things are officially finalised, binding the two families into a new relationship. The bride’s family does tikka on the groom’s forehead and shares a token of love in the form of money, coconuts and clothes. A priest is called to decide a date for the wedding, keeping all the nakshatras and grahas in consideration.

The mehendi ceremony is hosted one day before the wedding. Henna is applied on the hands and feet of the bride and the groom. The sister or the sister-in-law of the groom applies shagun ki mehendi on his hand, and the professional artists do the rest of the work.

The name itself is self-explanatory; this function is chiefly for the mamas (maternal uncles). Nearly 180-200 people from the maternal side arrive at the bride’s place with all the razzle-dazzle. They are welcomed with the warmth of hugs, customary shawls, mufflers, and Himachali caps. Sharing the joy of the wedding, the mamas then carry the bride on their shoulders from the main road to her home. A ribbon-cutting ceremony is held where the bride and the mama cut the ribbon together and later perform their traditional dance called nati. This ritual is considered one of the significant rituals in Himachali weddings that sets them apart from other weddings.

The tel-vatna ceremony is conducted on the wedding eve. The haldi is sent to the groom’s family by the bride’s family and vice-versa along with other gifts. The same haldi paste is applied to the bride and the groom as it is considered holy. When the haldi ceremony is completed at the bride’s side, the uncle and aunt of the bride escort her under a yellow piece of cloth to the place where the pooja takes place. It is preferred to put on yellow outfits on this day with minimal ornaments. The groom’s family sends delicacies called vade and poldu to the bride’s place in large quantities, later distributed among the people.

On the wedding day, chooda and suhagi are sent from the groom’s family for the bride. Chooda is a set of red and off-white bangles that the bride adorns at her wedding. Suhagi is a round piece of gold jewellery known as chaak in Himachal worn as a headdress or necklace. One of the important jewels that carry the pride of the Himachali brides is the nath (nose ring).

While the chooda is being adorned by the bride at her place, the sehra bandi ceremony is held at the groom’s place. It is a headdress tied around the groom’s forehead and covers his face in a veil. On top of that, he puts on a Himachali cap which makes him stand out from the rest. It is a significant custom in Himachali weddings. Sehra is also a turban that is worn by the male members from the bride’s and the groom’s families.

The relative meaning of milni is literally to come together. Once the groom and his baraat reach the venue, they are embraced by the closest relatives of the bride with shagun and other presents. Moreover, the uncles from the bride’s family offer mufflers and Himachali topi to the uncles of the groom’s side. When the ribbon ceremony is done, a ritual is performed by the bride’s mother where she ties moli (sacred thread) around the groom and gently takes him towards the mandap.

During the phera ceremony, a knot of red cloth is tied to the bride’s and groom’s attires, depicting the couple’s sacred bond. In a fun-loving ritual, the bride’s sister grabs the thumb of the groom and does not let them finish until he gives her money when the couple is about to take the sixth phera. It is a fun-loving ritual at Himachali weddings.

The Celebrations After Pheras

A small celebration is held once the wedding pheras are completed. The newlyweds sit on the stage as guests from the bride’s side present them with tokens of love and blessings. Later, nati is performed by everyone, including the couple, raising a toast of happiness in the new life.

Reception or as it is known as dham in Himachal, is the ceremony that is held after the grah pravesh of the bride to the groom’s place. It is a grand affair where the people from the groom’s side welcome the newlyweds with the tikka and other offerings. The groom’s whole family sits together and enjoys food once the festivities get over.

Dhanoj is the post-wedding ritual of returning of a bride after her first visit from dwiragaman (bride’s father’s house). The bride’s brother and a few other members arrive at her new house to bring her back to her maiden house for some time. The husband goes back later to bring his bride back after he enjoys a feast at her house.

The bride enters the kitchen for the first time to prepare a dessert for her in-laws, for sweet beginnings. In return, she receives shagun as a token of affection from her in-laws.

For The Man Who Deserves Best

For A Healthy Rosy You

This Wedding Season, Style your Saree with a Belt!