This year, the designers not only provided a glimpse into the collective consciousness but also showed us the underlying meaning of fashion at the Lakmé Fashion Week X FDCI. The runways brushed an abundance of extravagant hues, modernized classics, and beautifully handcrafted embroidery and embellishments. Here are designer-wise cues for your dream couture.

Dream couture cannot be defined in words, be it in the words of the bride who has been dreaming it since she was little or in the designer’s interpretation of their collection. A lot goes into bringing about the couture that you see on the runway ready to enwrap yourself in for your D-day. A craft worthy of a runway could be the one you wish to own.

Diving into the time of sheer elegance and reviving fashion nostalgia with the breathtaking collection ‘Capella’ — named after the brightest star in the sky. The designer duo’s risky affair came embraced in nostalgic splendour, unearthing the magnificent artefact from the Baroque Era—the Chandelier. Each ensemble used this outstanding work of layered creative lighting as their compass, and the collection showed various levels of inventiveness in their creations. Baroque leaf patterns have a particular, delicate grace in the embroidery of several of the pieces. ‘Capella’ stayed authentic to the theme because the early 17th-century era emphasised exaggerated styles and patterns. The design team began with a flamboyant nod to the neutral off-white colour, then moved on to rich mint gold and sombre charcoal, occasionally used in Baroque palace interiors. Shantanu and Nikhil showcased stunning lehengas covered with gemstones and crystals to meet the demands of the Indian bridal season. Tulle and veils were used to emphasise the tiers, which evoked the decadent, opulent style of the day. The baroque lace had been stitched in dori work, which was a striking adornment. The quintessential showstopper was the off-white lehenga accentuated with a luxurious tulle trail, an edgy bustier, and Baroque lace embroidered in dori on an edged tulle dupatta in magnificent tonal embellishments, executed in the stunning trio of ensembles 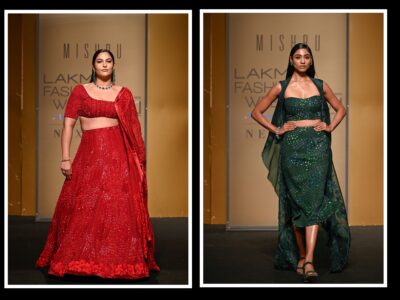 Swapna Aanumolu paid homage to festive wear with her colourful, feminine ‘Form and Feeling’ collection for her label Mishru. The collection developed into a surreal atmosphere of imagination that encircled the incredibly natural, organic patterns as it moved into an extraordinary language of shapes, colours, and forms that drew influence from various personal qualities such as nature, memories, and feelings. The design team took a more experimental route to create her new surface ornamentation, which was a sharp divergence from the existing forms. They focused on a micro level of design that generated a sense of delicate yet strong balance in her creation. An extensive collection of lehengas, cholis, dupattas, saris, gowns, cocktail attire and fusion classics gracefully navigated by Mishru’s bridal and formal couture. The outfits had a flowing, dreamy aspect, with the most opulent embellishments emphasising the forms in rich and vibrant colours. A rich magenta lehenga, choli, and dupatta, heavily encrusted with tonal 3D floral appliqués, brought the show to completion.

Swathed in the best of sustainability and technology, this exquisite poetic collection, ‘Damayanti‘ was designed by Lakme Fashion Week veteran designer Anju Modi. The collection aimed to create timeless, natural, and handmade silhouettes by drawing on the novel idea of reviving traditional crafts in collaboration with TENCEL™. The ethereal Damayanti-inspired paintings of the legendary Indian artist Raja Ravi Varma inspired the poetic fashion show, bringing a timeless romance to life on the runway. The use of modernised techniques and styles was evident in the designs. The elegant six yards lived the hype of organics, though the handcrafted silhouettes spoke a design language of their own. Anju Modi’s design philosophy has always worked wonderfully to empower the country’s craftspeople, and this season it balanced perfectly with TENCEL™ lyocell and modal fibres for the new line. The saris were woven in several traditional styles and intricately embroidered by hand. Rich colours artfully bordered sarees with contrasting shimmering borders that authentically maintained the Raja Ravi Varma inspiration under significant consideration. The fabric choice accentuated the designer’s vision to create pure poetry on the runway. The showstopper ensemble looked stunning in a black and gold draped dhoti, a maroon bralette, a black velvet embroidered bolero, and a royal purple dupatta with gold motifs.

In the beautiful medley of hues, the brushes had been plunged, painting the runway in the shades of English rose pink, subdued ivory, and dark powder blue; it then transitioned through emerald, dusty mint, orchid, pearl, cannoli-cream, and olive; and it ended with sage, sky, lunar grey, and midnight blue. As a tribute to their intrepid muse, designers Shyamal and Bhumika unveiled their SS23 collection, “Blooms of Paradise.” It was a lyrical fusion of craft and design with exquisite, handcrafted needlework embroidered with vision and regard for India’s rich history and legacy. The creative pair has always preferred traditional methods, which they have applied to exciting shapes in a spectacular colour palette. This season, the creative duo drew inspiration from a wide range of sources, including the splendour of nature, Indian heritage, enduring customs, and historic architecture. They subsequently drew inspiration from the grandeur and splendour of royal courts, museums, and both public and private collections before finishing with antique marketplaces. Embellishments included handmade embroidery, metallic threads with an antique finish, pearls, beads, and multicoloured resham. Beadwork, silk thread, and crystals combined with resham aari, silk zardozi, metal thread pitta, knotting, and sequin techniques brought all the handmade glamour. Sustainable hand-woven raw silk, Matka silk, sheer silk organza, tulle, and opulent hand-dyed velvet were among the fabrics that sparkled on the catwalk. The womenswear collection celebrated ensembles with modern-age shararas, draped skirts with jackets, shift kurtas, capes over jumpsuits, and lehengas with jackets putting intriguing combinations on display. The silhouettes included draped, flared, panelled lehengas; corsets; voluminous, flouncy sleeves; off-shoulder accents; empire lines; dhoti pants; structured saris; and a few trailing dupattas. The showstopper couture glided down the runway as a pastel, panelled, flared lehenga generously embellished with floral motifs and teamed with a shimmering corset choli. The delicate tulle dupatta completed the ethereal look of this gorgeous bridal wear creation with a sparkling edge.

For The Man Who Deserves Best

Makeup Inspirations For A Winter Wedding 2023