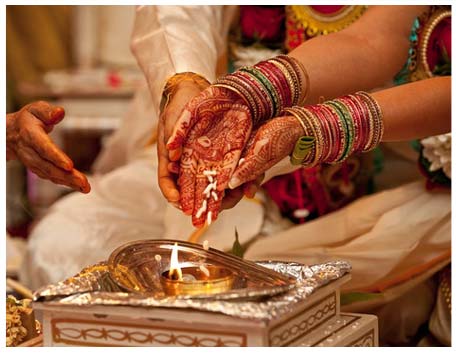 All weddings are beautiful, but there is something about Indian weddings that makes them unique in their own way. Thanks to our age-old customs and traditions, multi-cultural environment, and never-ending welcoming gestures, Indian weddings stand on top in the ritual section of the world. Each and every activity that is carried out holds a special meaning to it. So, today we will be discussing our top favorite rituals in the Indian ceremonies –

First things first, the auspicious of the wedding has to be decided. Usually, astrologers or other spiritually active people are invited by the families to their place. After this, the birth dates or the birth charts of the soon-to-be-couple are compared, based on which the person responsible for the same, announces a sacred date for the wedding. Later, multiple events are planned in such a way that they line up with the big date.

Haldi or turmeric is an ingredient that is mixed along with others like milk, rose water, etc to create a thick paste. This is then applied to the face, arms, and legs of the bride and groom separately at their homes. The purpose of applying Haldi is to abolish all the negative energies around the families before the holy matrimony. Haldi is also a healing component, which is why it is applied so that any minor or major issues faced by the couple inside out are washed away beforehand.

Red signifies love. But more than that it is a symbol of commitment. The color red is actively included in the theme of the wedding, or rather everything revolves around it. the couple, especially the bride wears an all-red ensemble, signifying the prosperity and happiness of the people involved in the matrimony.

When both the bride and the groom arrive at the wedding venue, they exchange pretty garlands in front of the guests, and a priest present with the two. Now, these are not just some flowers tied together for decoration. Jai mala, or var mala as it is commonly known, are exchanged by the couple as a gesture of welcoming each other into their respective families. How intricate are these details that are added even to the most basic wedding rituals!

Pheras are the rounds taken by the couple around a holy fire known as Agni. Varying throughout different parts of the country, some cultures ask for 7 pheras, and some ask for 4. Even the Agni is replaced by other holy components, depending upon the region or culture. While North Indians take rounds around the Agni, the people in the South take 7 steps on the contrary. Pheras are the vows or promises made by the pair towards each other which they pledge to follow for the rest of their remaining lives.

Mangalsutra is a holy necklace that the groom ties around the neck of the bride. It is a symbol of Goddess Laxmi who showers blessings of wealth and fortune over the newly married couple. Apart from this, the mangalsutra also brings prosperities to the lives of the couple. In today’s times, the bride can choose to wear the necklace for the rest of her married life or not.

Another sign of an Indian wedding is the sindoor or vermilion, which is again a red-pigmented powder that goes with the red couture. It is the final ritual performed by the couple that confirms their nuptials. The groom takes a pinch of the sindoor and glides it across the center partition of the bride’s hair.

Well, we have reached the last ritual on our wedding list, however, this is not the last ritual performed in Indian wedlock. When the newly wedded couple arrives at the groom’s home for the first time after the wedding, the bride is welcomed with multiple warm gestures, one of which is the Kalash ceremony. A small vessel filled with rice is placed at the entrance of the house, which the bride has to lightly kick or tap through her foot to enter the house. This means that the bride is bringing tonnes of abundance, health, and prosperity into the house.

Some Pacts, Do Not Have a Bad Impact