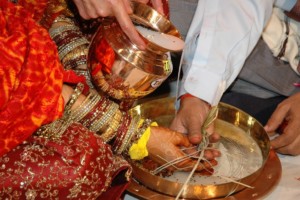 India is a land of customs, religions and values where it is believed that marriages are made in heaven and is a blessing to a woman. Marriage is a pure alliance between two souls in every aspect of their lives. People attach great deal of importance in our country to marriages. They come up with great joy, enthusiasm, energy and happiness in two people’s lives. Nuptials involve enormous amount of rituals and ceremonies like Mehendi, Sangeet, Ring Ceremony, Cocktail and Bachelors Party, Reception, Vidai, Joota Churaai ceremony, Pag Phera, etc but there is one single ritual and practice which signifies that the bride is been officially gifted and handed over to the groom as his caretaker and beloved. It is expected that the man is her everything. The father hands over her daughter’s hand to her husband in front of pure agni and the groom takes vow to protect and help her in the difficult times of her life (naticharam).

Kanyadaan makes a man understand the fact that his wife is the most precious and valuable blessing given to him by her parents. As a symbol of acceptance, the groom touches the right shoulder of the bride, promising to take care of her and holding her responsibility. The groom says, “I accept this girl for the fulfillment of righteousness (dharma) and for acquiring progeny.”  It is believed that a girl/woman is a paraya dhan to her original root and has to go one fine day to her beloved’s house and settle there. It is considered as the basic and the most vital beginning in a married life of two. In India, especially in Hinduism, kanyadaan has managed to become the most proficient and prominent ritual so far. The auspicious ritual has traveled through more than 5000 years in Hindu culture. The promise of giving away the daughter’s hand in a nuptial also includes the resolve of a ritual of giving away ( vanhnischay).

This tradition performed during the wedding has its own distinctive implication and is executed with immense reverence. The eternal bond between a father and a daughter here in this practice is shown that how a father protects her little princess from this bad world and now is giving over his pride and love of his life to someone whom he trusts and feels will do the same as he has done till now. Kanyadaan is a symbolic gesture signifying an eternal promise by the groom to a daughter’s father. The groom is considered to be an incarnation of Lord Vishnu where as the bride is believed to be a form of Goddess Lakshmi who brings wealth and prosperity to her husband. A message is been sent by the father to the groom to not violate the regulations in regard to righteousness, wealth (artha) and desire (kama) related to her.

Over the passage of time, with modernizing seeking in, the customary beliefs and practices are losing their importance, however, Kanyadaan is still practiced in every wedding of every religion.

Slay Your Shaadi in Sneakers

A Traditional Tale of Kuldevi Parampara