Bollywood singer Neha Kakkar tied the knot with Rohanpreet Singh in a gorgeous ceremony on Saturday. Following the COVID-19 rules, the wedding was a close-knit affair with only family and close friends in attendance. The much-in-love couple got hitched in a traditional Anand Karaj ceremony in Delhi on Saturday. Apart from the family and close friends, celebrities like Urvashi Dholakia, Baani Sandhu and Jassi Lohka also attended the wedding. Following the wedding, the couple is expected to head to Punjab for a grand reception.

The Anand Karaj ceremony was as beautiful as it could get. After the wedding, the couple hosted a lavish reception party, which also included the “varmaala” ceremony. The newlyweds kept twinning, this time in red. Rohanpreet also crooned for Neha, leaving her blushing. The guests included Urvashi Rautela, Meet Brothers, Mankirt Aulakh, Rajat Nagpal and Maniesh Paul. (Source: The Indian Express)

For the second ceremony, Neha looked ethereal in a red bridal lehenga with a giant nose ring. She made a grand entry in a big chariot with a veil over her head. Everything looked lavish as a  troupe of dancers in blue and golden costumes performed in front of the chariot as she arrived. She then reached an elevated podium where she exchanged garlands with Rohanpreet, as per reports. A viral video from the ceremony shows Neha and Rohanpreet breaking into a conversation soon after the ceremony as they posed for photographs.

The Wedding Attires and Shenanigans

The couple took the internet by storm with their photos from the pre-wedding festivities which includes a Haldi and Mehendi ceremony. For the Haldi ceremony, Neha Kakkar sported a simple look as she donned a yellow-hued sari with a flower-adorned hairstyle. 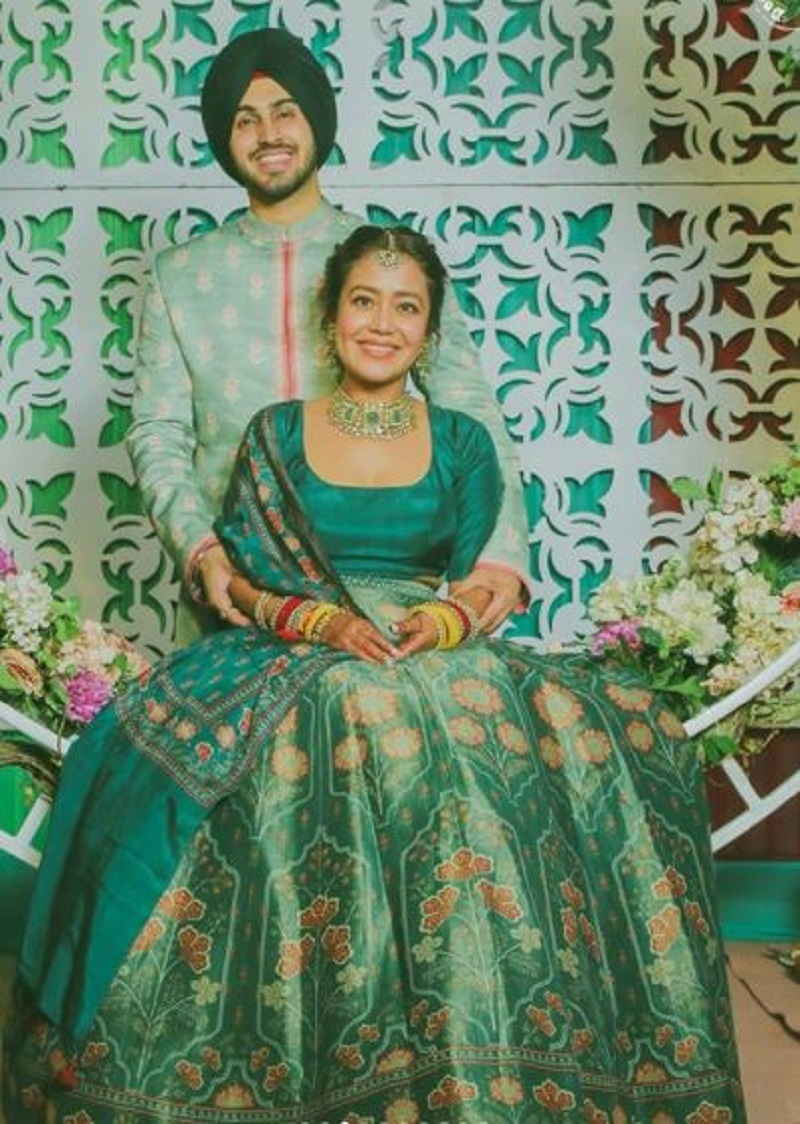 After wooing us with her Haldi photos, the beautiful bride stunned us with her Mehendi photos. In the photos, she was seen wearing a printed lehenga by Anita Dongre. The Cynara lehenga in emerald green colour featured floral prints in traditional art. Neha Kakkar teamed up this satin lehenga with a green coloured blouse and a matching-print dupatta. (Source: ToI)

For the wedding, Neha Kakkar looked pretty in a peach lehenga with organza dupatta. Singh donned a matching kurta and turban, colour-coordinating his outfit with the bride. The newlyweds kept their look quite traditional. 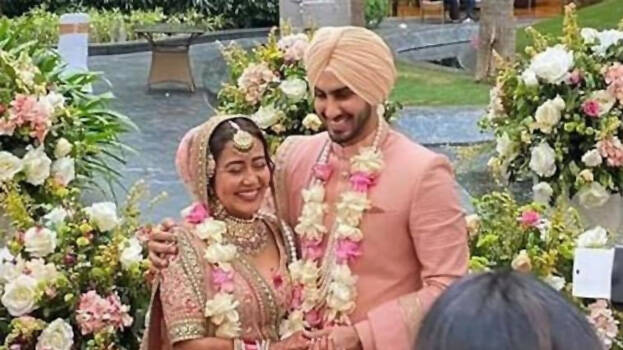 As you know, for the second ceremony, Neha Kakkar looked ethereal in a red bridal lehenga. Meanwhile, Rohanpreet was in a white and silver sherwani with a red turban to compliment Neha’s look. The couple then headed to the dance floor. A video from the party shows Neha, without the veil, as she grooves with her gang to the song Chocolate. As a part of the celebrations, she also sang a song for Rohanpreet with the lyrics being “Is zubaan pe Rohan da naam hai.”

Date night ideas for your anniversary

Akash Ambani And Shloka Mehta Kick Off Their Pre-Wedding Festivities