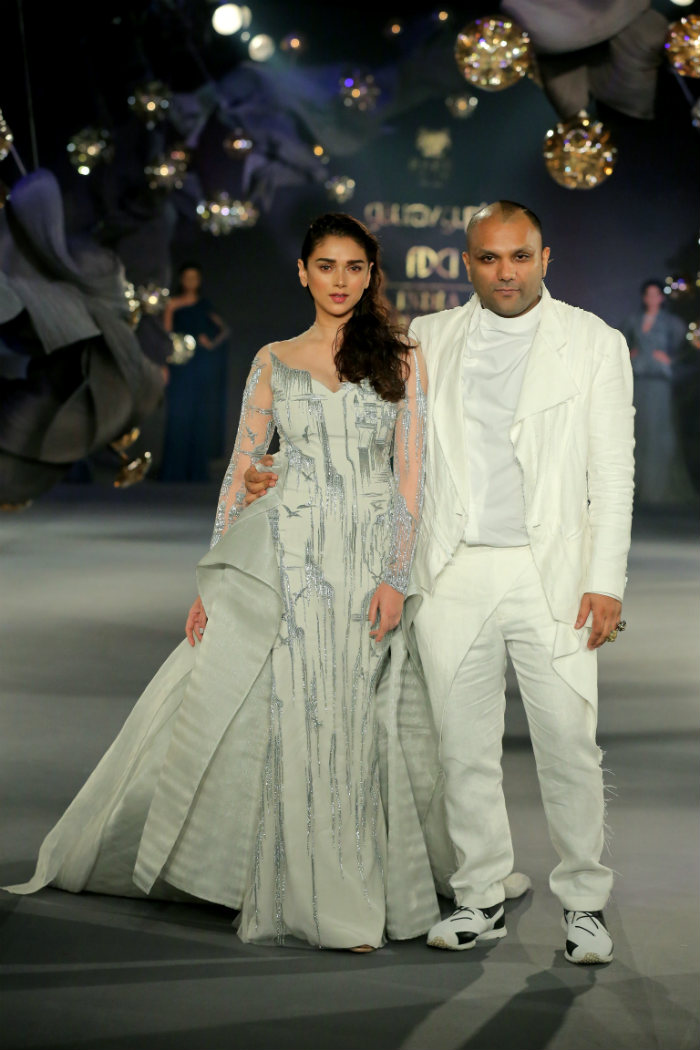 At the 10th edition of FDCI Indian Couture Week, 2017, avant-garde designer Gaurav Gupta presented his lineup “Moonshine”, which was an amalgamation of fairytale themes from the past and futuristic techniques and materials.

“I wanted to make couture feel new and refreshing again. So, I’ve included sculptural shapes that seem fantastic and surreal, but achieved in painstaking hand crafted embroideries and silhouettes.” explained the designer.

The entire collection was very character driven, and featured elements of magical realism, such as bejeweled stags, birds that fly across the bodice, and waves embellished with mother of pearl sequins.

Commenting on the theme, Gaurav Gupta said, “It’s like Cinderella wore these clothes to a surreal ball and we discovered them, centuries later.”

The designer used his signature fabrics such as chiffons, crepes, dupions, tulles, nets, and lace, and elevated them into fantastical shapes that accentuated the models body. The garments had broad, exaggerated shoulders, and translucent fabrics on the waist and legs.

The colour palette too complemented the fairytale themes with the use of shades like grey, stone blue, pearl blue, teal, and other shades of green and blue.

He tried to mimic the filigree windows of a Persian Palace by the use of lace over precision cut jackets and created the illusion of shadow and light, with silk thread on transparent net.

For the designer, the collection was also a representation of the meeting point of the Indian craftsmanship and European techniques.

He said, “For me, the boundaries between traditional and modern couture are blurred. I sit at the cusp of the two and use the best of both worlds.”

The collection looked even more dreamy when actress Aditi Rao Hydari closed the show, walkingd down the ramp wearing a long, embroidered white gown with a strong shade of silver grey, with minimal makeup, and no accessories.