Don’t you still remember your trip to Kerala? That gush of cool breeze by the gorgeous palm-fringed beaches, plentiful breath of fresh air to calm your senses, shacks of tender coconut seller by the roadside, backwaters, experiencing your spiritual existence amidst the lush green flora, the music of the ocean waves, the calm and radiant faces of the natives, the simplicity of the people who enjoy a meal on a plantain leaf as if mindful not to distance with the ecosystem, and verdant nature all around you is a balm to soothe your senses. Kerala in its entirety is a perfect unison between immortal nature and perishable mankind. The place and its people complement each other. Kerala is a journey for the soul, to the soul. So is reflected through its people and the weddings in God’s Own Country.

Their rituals, outfits, food and ceremonies are no different, but known differently. Non-flashy, less noisy, short, simple, sweet and soulful is how one can describe a Malayali wedding. This season, we explore how Malayali Nair community celebrates the union of two individuals ready to devote the rest of their life’s journey to the person by their side.
Most of the South Indian weddings take place in the morning as the time after the sunrise is considered to be very auspicious and hence, blessings of the Sun are sought before the couple steps into a new phase of life.

Days To The Kalyanam

Pre-wedding ritual begins with a Muhuratham, which is to fix an auspicious date for the engagement and later, the wedding. A family astrologer draws a date after matching the respective horoscopes of the bride and the groom. Once the date is decided, the families exchange the matched and approved horoscopes in a traditional engagement ceremony known as Nischayam which is a formal announcement of the marriage. This event usually takes place at the bride’s house amidst the presence of elders. The boy and the girl exchange rings in a traditional ring ceremony known as Mothiram Maattal. Token sweets and ornamental gifts are exchanged after this ceremony.

Nair weddings do not have pre-wedding rites like mehendi or sangeet as in North India. Though now, with the influence of Bollywood, wedding may include these functions too. A Malayali mehendi ceremony is similar to the mehendi ceremonies all across India. Contrary to a traditional mehendi where artistes are called in to apply intricate patterns, here the bride’s aunts begin to draw the designs on her hands and feet.

A Day Before Kalyanam

Usually a Sadhya or a multi-course feast is arranged on the wedding eve. The bride has to sit facing East and is served a vegetarian meal with her loving family members. Post this, the bride visits the nearest temple and offers prayer to seek blessings of the Gods before entering a new phase of life. Upon reaching back home from the temple, she also seeks the blessings of her elders by touching their feet. Bride wears a silk saree while the groom wears a traditional attire for a similar set of rituals that are conducted at his home.

On the wedding eve, the groom’s sister is accompanied with a small party of women to the brides’ house to hand over the wedding saree to her. This ritual is called Podava Kodukkal and is followed by an elaborate dinner.

On the Day Of The Kalyanam

The marriage is solemnised in the ancestral house, a temple, a banquet hall, a hotel or a convention centre.

On the wedding day, the bride usually wears a two piece saree set known as set mundu.  Bedecked in copious layers of heavy gold jewellery, she adorns fresh jasmine flowers in her hair for the traditional look. The groom is dressed in traditional mundu (sarong) and veshti, or shawl.

Before proceeding to the venue, both the bride and the groom seek the blessings of their elders by giving dakshina or acknowledgement, in the form of betel leaf, areca nut, a lemon and a coin, and touching their feet. The bride wears a silk saree while the groom wears a traditional attire for the rituals conducted at their homes.

After a temple visit to invoke blessings of God, the bride is accompanied by her maternal uncle to the decorated mandapam – a hooded decorated canopy under which wedding takes place. At the mandapam, a para (container which is a traditional paddy measuring unit) filled with husked rice up to its brim is kept, topped with bunches of coconut tree flowers to signify abundance. This is known as nirapara and is a common sight at all auspicious occasions in Kerala. 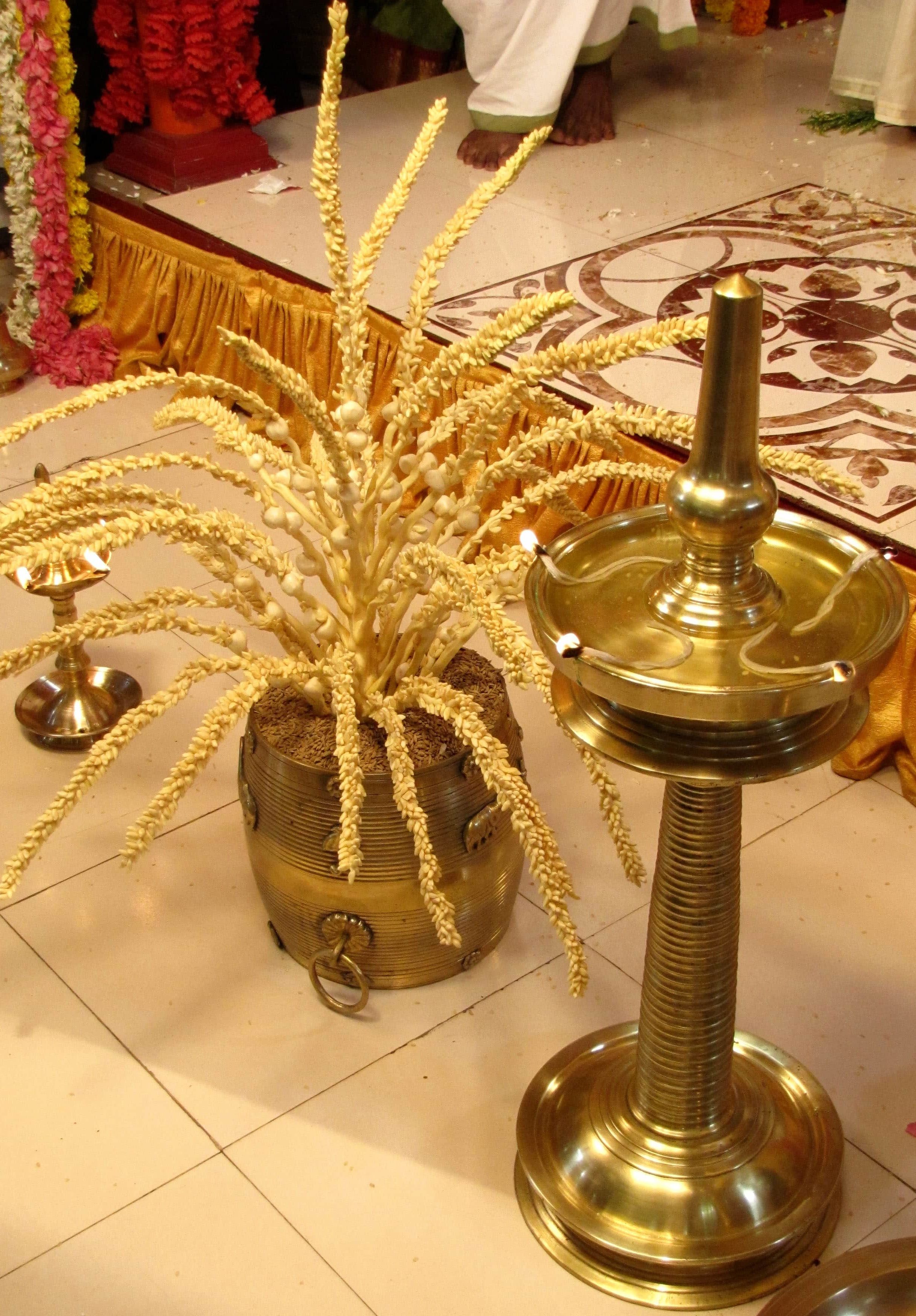 The groom dressed in a traditional cream off-white mundu, receives a hearty welcome at the wedding venue by the bride’s brother. Going by the custom, the groom stands on a wooden plank while the bride’s brother washes his feet as nadaswarams – long wind instruments play.

The bride’s brother offers lemon and chandanam (sandalwood) to the groom, honours him with garlands and a bouquet. Rose water is sprinkled on the groom before he is ushered to the mandapam, this complete ritual is known as Punyaha. A Thaalam procession comprising young girls and women from the bride’s side carrying brass plates with lit diyas (traditional lamps) and other sacred essentials leads the groom to the mandapam.

While around the same time inside the bride’s room, aarti is performed with Aayiramthiri (a lamp with multiple flames) to cast off the evil eye and also purify the bride before the wedding. The aarti is performed by an outsider, someone who is not directly related to the bride.

The bride is escorted to the mandapam by her maternal uncle to the sound of nadaswarams and garlands are exchanged in a traditional ceremony known as Maala Maattal– accepting each other as life partners.

Then arrives the most auspicious moment of the wedding – Thalikettu or the tying of thali (mangalsutra).The bride’s aunt hands over the thali to the priest who gives it to the groom to tie it around the bride’s neck at the exact auspicious moment. The atmosphere resonates with the beating of drums and the ceremonial ululations made by women.

Post this, the groom applies sindooram (vermillion) on the bride’s hair in exchange of which, she applies chandan on his forehead. The father of the bride places her hand into the groom’s to solemnise the wedding under the custom known as Kanyadaanam (giving away the daughter).

During Sparsham, groom sits facing the bride and tilts his head to touch the forehead of the bride. Amidst Vedic mantras being chanted by the priest, the bride offers laja (puffed rice) to the fire and the groom then lifts the bride’s foot and places it on the ammi (grinding stone). The groom moves the bride’s foot seven times welcoming her to his home and family.

The groom presents the bride with a traditional mundu veshti and a silk saree in what is called the Pudava Maattal. This marks the formal end of the marriage ceremony. The bride then changes into the saree given by the groom to participate in the festivities that follow.

The Kalyanam ceremony is usually done by lunchtime and the feast consists of 25 items including par-boiled milk, rice, side dishes, savouries, variety of pickles and desserts served on a plantain leaf. Tradition insists that tapering end of the leaf must point to the left of the seated guests.

At the appointed auspicious time, the bride proceeds to her new home, after taking blessings from her parents and all elders present at the venue. At the threshold of the grooms house, aarti is performed for the newlyweds with a traditional lamp. The bride then enters her new home by placing her right foot inside first, with a traditional lamp in her hands. After a Ganapati Puja is performed, the new bride enters the kitchen and boils milk to herald her inclusion into the new family. This Nair wedding ceremony is called Kudipev.

Malayali Weddings have the rare distinction of being the shortest wedding ceremony amongst all others. They are an experience in themselves, laying more emphasis over comprehending real marriage than a mere cacophony. Malayali’s are very particular about punctuality hence, everything is well-planned, on time, pious and peaceful – something other big fat Indian weddings give a miss.

Tackling loneliness during this pandemic

Hindu pre-wedding ceremonies to be acquainted with